Until she started pharmacy school, Latasha Guy assumed asthma was something her community just had to live with.

“Asthma was so normal for people to have where I grew up in Chicago,” says Guy, pharmacist and manager of the Walgreens specialty pharmacy at Lutheran General in Park Ridge, Ill. “We were always hearing this person is in hospital because they had a severe attack, or this person passed away due to their asthma. I had no idea these types of outcomes could be prevented because there just wasn’t that level of health literacy in my neighborhood.”

While working as a Walgreens pharmacist at stores on the South and West Sides of Chicago, Guy witnessed countless examples of people not fully understanding how to properly address their asthma diagnosis. One patient particularly sticks out in her mind.

“An elderly patient came to the pharmacy window, telling me she couldn’t breathe, and asking for her rescue inhaler,” Guy recalls. “She was trying to catch her breath, so I had her sit down while I filled her prescription. Once she was able to breathe again, we were able to have a good conversation about how she could get her asthma under control – but what if I hadn’t been there?”

The fact that the woman came to her local Walgreens when she was experiencing such distress is not lost on Guy. “Some of these communities are healthcare deserts, and there’s a real lack of access to primary care, so people are forced to use emergency rooms – or come talk to their local pharmacists – instead of having preventive healthcare conversations with primary care providers. So many people are not getting education on how to prevent or control chronic conditions like asthma, diabetes and hypertension, which could keep them from having to take medication or go to ER in the first place.”

As part of a new Walgreens initiative meant to address health inequities in underserved communities, Guy is helping find ways to provide this educational piece, in addition to other measures that might help narrow the gap in health outcomes between poor and wealthier neighborhoods. And for the particular community she serves in Chicago, there’s no better place to start making a difference than pediatric asthma.

Asthma is prevalent in the Black community at large, but in the Windy City, rates of the condition are particularly high among children. A recent study showed that 16 percent of families in Chicago havea child diagnosed with the disease, far higher than the nationwide norm of 12 percent and Illinois state rate of 11 percent.

Beyond the obvious concerns about this increased risk, Walgreens’ health outcomes team uncovered another alarming statistic: medication adherence – the measure of how accurately a patient is taking their medicine – is markedly lower in asthmatic Walgreens patients in the U.S. who are under the age of 18.

“We started thinking – why is adherence so low in this group? And what can we do to help?” says Evie Makris, manager of patient outcomes performance at Walgreens, whose team looks at ways to improve health outcomes across the pharmacy business. “There’s a lot of focus on adherence for adults, but this seemed like an opportunity to do something right for kids.”

Further research showed that a lack of education was a big reason for the decrease in adherence. Parents weren’t confident enough in their understanding of different treatments – if their child was inhaling the right amount of medication, and the difference between rescue versus controller medications. So Makris helped construct a pilot program, launched in Texas, that targeted patients picking up a new asthma medication for the first time as well as patients who had been identified as “high risk” based on records and adherence scores.

“We created an asthma patient-centered care training for our pharmacists, to show what a high-touch consultation should look like for pediatric patients with asthma,” she says. “This included how to go over the differences between rescue versus controller medications and when to use each, explain different asthma triggers, and help patients come up with an action plan for attacks or flare ups.”

But there was another piece of the puzzle that had to be solved. The adult having the conversation with the pharmacist wasn’t the only target of the intervention; the pharmacists also needed to find a way to involve the patient. The training encouraged pharmacists to bring the child into the consultation, engaging them and giving hands-on demonstrations of how to use inhalers so that both parent and child would feel informed and confident.

With younger children, though, this was sometimes easier said than done. Enter Jaime Horan, senior business analyst of pharmacy and retail operations at Walgreens, with a superhero of an idea.

It’s a bird, it’s a plane … it’s an asthma fighter

“I wanted to have something available for the kids that could help pharmacists pull them into the conversation versus just standing to the side,” says Horan, who worked on the Texas pilot with Makris. “So I created a few different word search worksheets with different asthma triggers, to help kids get more familiar with what those triggers were, and we made sure to encourage the pharmacists in the pilot to have them available to hand out to kids during these high-touch consultations. I made two versions, and had them translated into Spanish as well.”

At the pilot site, the sheets went over so well that Horan partnered with the Walgreens creative teams and vendors to develop an 8-page activity book, with “superhero” characters who could help kids get more comfortable with their asthma. These booklets will be available to patients at the Chicago health equity locations, and further versions are being explored for other chronic childhood conditions such as type 1 diabetes.

“My hope is that the booklets can walk children through their own disease-state management, with these little characters that they can relate to,” says Horan. “It's not just reading about people managing their asthma – it's pulling that child in to feel like they are with their little group of cartoon friends, battling asthma together.” 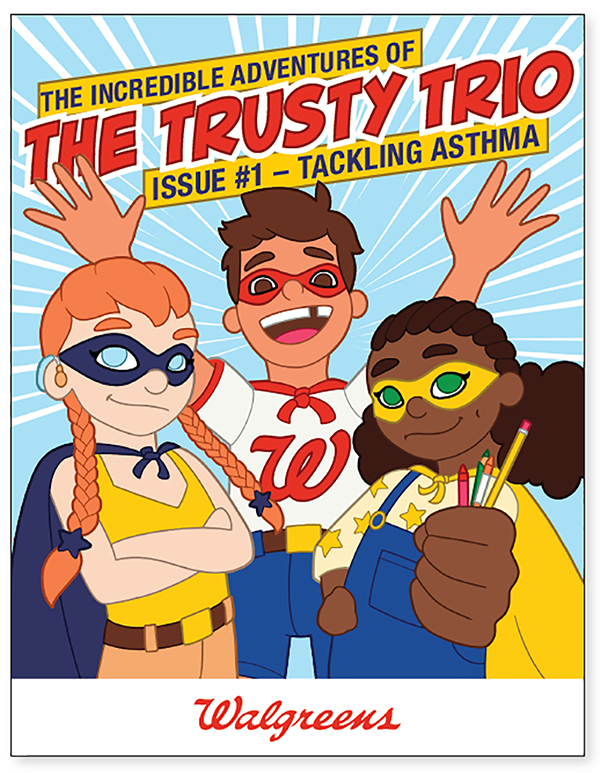 While formal results of the Texas pilot won’t be available for at least six months, the team has received overwhelmingly positive feedback from patients and pharmacists alike. And now that the pilot will be extended to Chicago as part of the health equity initiative, Makras, Horan and Guy are eager to see if this type of intervention could have a significant impact on a community in dire need of improved health outcomes.

“Asthma fatality rates are high in the Black community, especially in underserved communities,” Guy acknowledges. “But they don’t have to be if we do our part, and educating parents and children is a big first step. This is us saying we’re aware, and we know we can provide more to our communities.”

The “more” is what Guy is currently focused on developing – she’s looking at issues like transportation and lack of insurance in specific neighborhoods, and finding ways Walgreens can help with offerings such as digital tools, prescription delivery and money-saving options on certain medications. But the pediatric asthma pilot is close to her heart – something that makes her feel like she’s come “full circle” from her childhood awareness of what should be a controllable disease.

“We have tools at our disposal, but it’s up to us to make sure people can access them,” Guy says. “And that starts with understanding the needs of the community and having these important conversations between our pharmacists and their patients. This program gives me hope for the future – it allows me to fulfill my purpose as a pharmacist.”

That reaction is music to Makris’ ears.

“One of the most exciting things I've heard through feedback on our program so far is that the connection between the pharmacist and the patients is growing more than ever, by having these engaging conversations,” says Makris. “I hope that in Chicago, and hopefully in other communities to follow, we continue to hear that patients see Walgreens even more as a place for help and resources and education, rather than just filling prescriptions.”