At some point in our lives, we’ve all relied on someone, somewhere, to look beyond our nerves or lack of experience, catch a glimpse of our true potential and offer us an opportunity that will set our career into motion.

On a mission to transform the lives of young people, Boots UK and The Prince’s Trust are doing just that. Their partnership provides meaningful opportunities for young people to develop the skills, confidence and self-esteem they need to live healthy and happy lives, regardless of their background.

As part of the UK government’s new Kickstart scheme alongside The Prince’s Trust, Boots UK has opened its doors to a cohort of 90 fresh-faced young people, all eager to enter the workplace. With the UK set to see a period of sustained youth unemployment, their six-month job placements will give them the essential experience they need to jump start their careers.

Growing up in Nottingham, England, Boots UK’s home city, Keaton Anderson was in the same spot as countless other teens across the UK: having only just retired his school uniform, he felt the overwhelming pressure to make life-changing decisions that would shape the course of his future.

“I was in a tricky position. I didn't really know where I was going, or what I was passionate about,” Anderson says. “A lot my friends were saying, ‘I’m doing this at college or I’m going to go to university.’ They had their lives mapped out, and I was left thinking, ‘I don't know what I'm doing from day-to-day, let alone in the next five years.’ My brain was frazzled.”

Like so many young people contemplating their future, university is often considered the key to unlocking one’s potential. But Anderson was keen to explore the road less traveled.

“I thought about going to university. I would've gone for the experience, but I didn't really know what I wanted to do. It would have been three years wasted,” he admits. “I'd already tried pot-washing and door-to-door sales and I started to get a taste for being employed. I just wanted to find a place where I belonged.”

Finding a place to belong

The job market can be tough terrain to navigate at the best of times, let alone during a global pandemic. Unsurprisingly, youth employment has been worst affected, with people under 25 accounting for three in five lost jobs in the UK, according to the Prince’s Trust.

This is something Anderson, at 21, knows all too well.

“I had been out of work for a year, and with so many people using job sites and applying for the same jobs, companies have been bombarded with experienced applicants,” he says. “There’s just too much competition for young people like me.”

In a world where hours and hours’ worth of time spent on applications can often result in radio silence from recruiters, entry level roles often ask for a degree and years of experience beyond one’s age. Helping to tackle this issue head-on, the Kickstart scheme is providing a platform for young people who are unemployed and not receiving any formal education or training.

Charlotte Cane, Anderson’s mentor and learning and development admin manager at Boots UK, has seen first-hand how the program is setting its candidates up for success with its thorough onboarding process.

“The preparation they receive before the recruitment stage prepares them for the workplace,” says Cane. “From their CVs, their attitudes, considering what to wear and how to answer interview questions, they’ve got it all. Keaton and the other candidates learned exactly what to expect from a working environment.”

Well equipped and well prepared, Anderson was delighted to have secured his job placement at Boots.

“Finally, after all this time, I had been given an opportunity to show what I can do at a well-recognized company,” Anderson says. “I can get back into a routine and start my journey again. This is my chance to prove I have the potential to be successful. I’m really going to make this my own and see where I can take it.”

Gone are the days where new recruits on apprenticeship-style programs might find themselves taking on simple tasks and odd jobs. With the support of monthly Employability Workshops and regular progress reviews, Cane truly has Anderson’s best interests at heart.

“Keaton and our other candidates have far more potential,” says Cane. “We can challenge him and really get the most out of him, as we would do with any other new recruit or team member.”

With a newfound sense of responsibility, Anderson is a noticeably different version of the young man who walked into Boots UK’s Nottingham Support Office four months ago.

“I started off as a blank canvas, but now I’ve been able to develop new skills in a real-life setting,” says Anderson. “When I’m editing and uploading content on to the intranet and managing any queries, it gives me a huge sense of pride knowing that I'm being trusted to complete something all on my own and I can have my name attached to it.”

The teacher becomes the student

It’s not just Anderson who’s benefitting from the program – it’s Cane and his new team members, too. Having been in her current role for six years, Cane and her wider team have also been on a journey of self-discovery.

“I wasn’t expecting to learn about myself, but becoming a mentor has helped me grow in confidence, even down to my own technical skills in training Keaton,” she says. “This has reminded me how far I’ve come in my own career and just how much knowledge I can share.”

As Anderson looks forward to life beyond Kickstart, he’s taking time to reflect on the impact the program has had on him so far.

“I’m definitely smiling a lot more! Being able to get back into work, get my head down and feel like I'm being productive again gives me a huge sense of purpose,” he says. “The scheme has let me know that I am capable of doing things that I would never have considered before. I know I can use the skills I’ve developed at Boots and adapt them to new opportunities in the future. I’ve got my teeth into it now and I just want more. I’ve grown as a person, and I know this is just the first step in my career.” 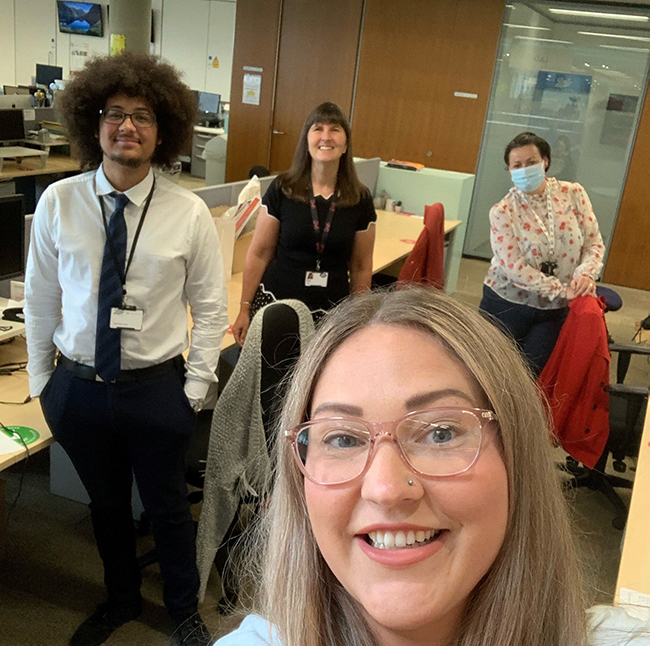