Even after 48 years as a Boots pharmacist, I can tell you that there’s always more to learn.

I retired about eight years ago—for all of two seconds! I was initially reluctant to change my plans to draw my career to a close, working then as a store manager, but I haven’t regretted a second of returning as a relief pharmacist across multiple stores in the East Midlands, UK.

Most mornings, I get a call around 7 telling me which pharmacy I’m supporting that day. I turn up to a store, and what is really great to see are those big, welcoming smiles. The team is always really happy to see me. I then find out what the priorities are for the store because each one is different. At the moment, it’s flu clinics all day long.

I’ve become a sort of father figure in the stores I support. I always like to talk to people—customers and colleagues—and I love when I get the opportunity to share my knowledge and experience with others.

Pharmacists are the new healthcare providers on the high street—something we saw especially during the COVID-19 lockdowns. We are always looking to advance our skills and knowledge, and nothing gives me more satisfaction than training others, whether they’re newer or established pharmacists. I believe they are the future.

I like to think I make a positive impact on every store I attend. As I always say, deal with people the way you expect people to deal with you. If you do that, people are really appreciative. I like to think that’s where the public trust in Boots comes from.

Why I do what I do

Outside of work, I’m a keen collector of military memorabilia. One time I turned down an invitation to an exhibition with the Queen in favor of attending a Boots conference on vitamins! Why, you ask? To me, it’s because of our culture that puts patient health at its heart. It’s what makes Boots special.

I love that over the years, I’ve had managers who have allowed me to grow in the direction I want. I’ve met a lot of people who have come and gone, but I’ve always had leaders who respect what I do on the front line.
Pharmacy has changed a lot for the good of the patient during my career. From a much larger array of medicines to having better awareness of patient safety, my job today is almost unrecognizable from when I began.

I never would have imagined I would be doing even flu shots when I first started. We would count pills and mix medicines, but we didn’t interact with the patient in the same way. Now I know that talking with our patients is the most important part of the job. 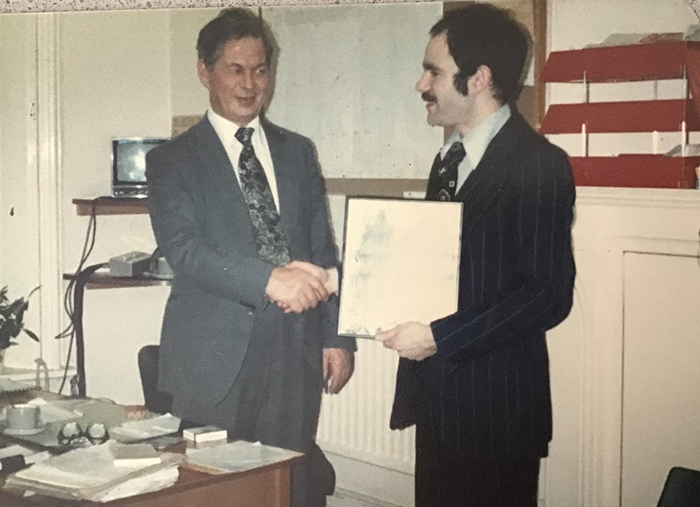 My most treasured memory

The knowledge pharmacists have can even be lifesaving. Without the intervention of pharmacists, there are so many people who may not be with us today. If I have one, two, three stories I can remember about saving a patient’s life, how many more pharmacists are there who have similar stories?

One of these stories involves a patient from 20 years ago. He was in his 40s and was a regular patient with us picking up his prescriptions. You get talking to your regular patients, and he eventually told me he had cancer and the prognosis wasn’t particularly good. He kept coming in for various medications, and we always talked. He became more than just a regular customer.

There was a period when I realized I hadn’t seen or heard from him for a while, until he phoned me up from the hospital one day. He told me he didn’t want me to worry that he wasn’t around. He said they were trying to give him a bone marrow transplant and had to find a donor. I immediately said, “What about me?” But sadly, I wasn’t a match. He died not long after that.

His wife later came into the pharmacy to thank me, and to say that one of his last wishes was to have me as a pallbearer at his funeral.

The funeral was at about 11 in the morning, and I couldn’t get any cover for my shift. But the area manager at the time, who I knew well, let me close the store and go. And that just shows the extent that our customers matter—not just to me, but to everyone at Boots.

Someone once told me you can tell a person by the footprint they leave behind once they’re gone. That’s really important to me for when I retire. My biggest ambition in life is to reach 50 years with Boots, but until then, I’m still driven to continue learning, growing and making an impact on my team members, our customers and our patients.