Diego Rivera’s “Detroit Industry Murals,” a 27-panel fresco within the Detroit Institute of Art, is considered his masterpiece. The mural depicts the complex relationship between humans and machinery through intertwined scenes of Detroiters performing manual labor next to emerging technology. Men forge metal at a nearby Ford Motor Company plant, plowshares work through fields next to women gathering crops, and passenger and bomber planes fill the sky.

At age 6, Sydney James would visit this museum and absorb the wonders of the symbolic frescoes, a seed of inspiration taking root. It would bloom into an impassioned art career, one dedicated to painting large-scale images of powerful females. Now an accomplished muralist herself, James considers Rivera one of her heroes.

“His philosophy was that artists should create for the people,” says James. “That’s why he always did murals and public art. And if that's true, then I'm exactly where I'm supposed to be, because I'm an artist of the people. I'm a super duper Detroiter. I’m a super duper Black woman.” 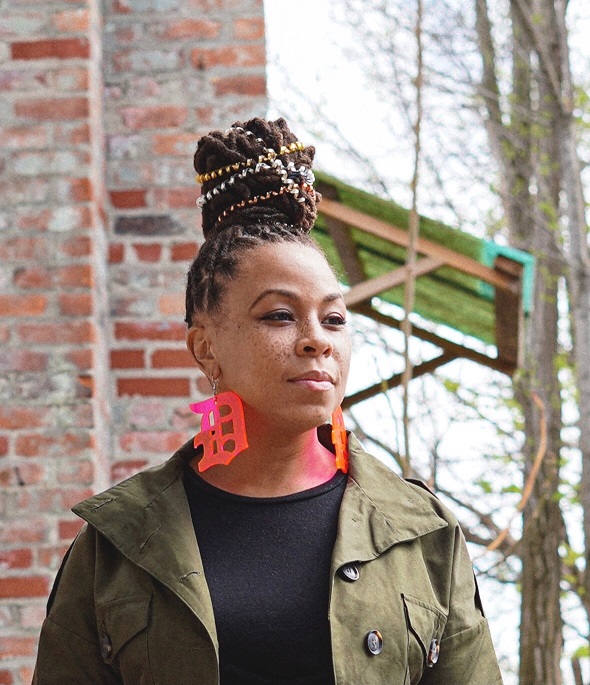 James would eventually graduate from the College of Creative Studies, a private art school in Detroit, and begin her career as an art director at an advertising agency. She then took her talents to Los Angeles in 2004, working as a ghost artist for film and television productions. But after several years of success in commercial and visual art, she felt a tug – not only to return home, but to express her beliefs creatively. She moved back to Detroit in 2011, a pivotal time when the city was on the brink of bankruptcy.

“The fog of foreclosures and all the redlining made it look like a ghost town,” James recalls. “It wasn’t hard to stumble across an abandoned building or crumbling storefront.“

This is when the city’s artistic community rose up and seized what, to them, were blank canvases, transforming brick walls and overgrown lots into eye-popping works of art. James joined in, entranced by this new medium where she could paint the people who inspired her most in a way that was accessible to all.

“The beauty of murals is that you have an unintentional audience,” she says. “You can affect the world in a different way. Many communities, especially underserved, don't think art belongs to them because they've never been exposed to it. They've never been on a field trip to a museum. Public art gives people their first chance at interacting with art, period. And it might send somebody to a museum or a gallery to see more.”

James’s notoriety as an artist who paints strong females, and often strong Black females, grew in tandem with the mural movement. No7 Beauty Company took note and reached out to James to collaborate on its No7 ”Unstoppable Together” campaign in January to raise awareness on the disproportionate impact the COVID-19 pandemic has had on women in the workforce. In response, James painted a determined Black woman, standing her ground, mask in hand, like a superhero in front of a team of supporting women in the background. 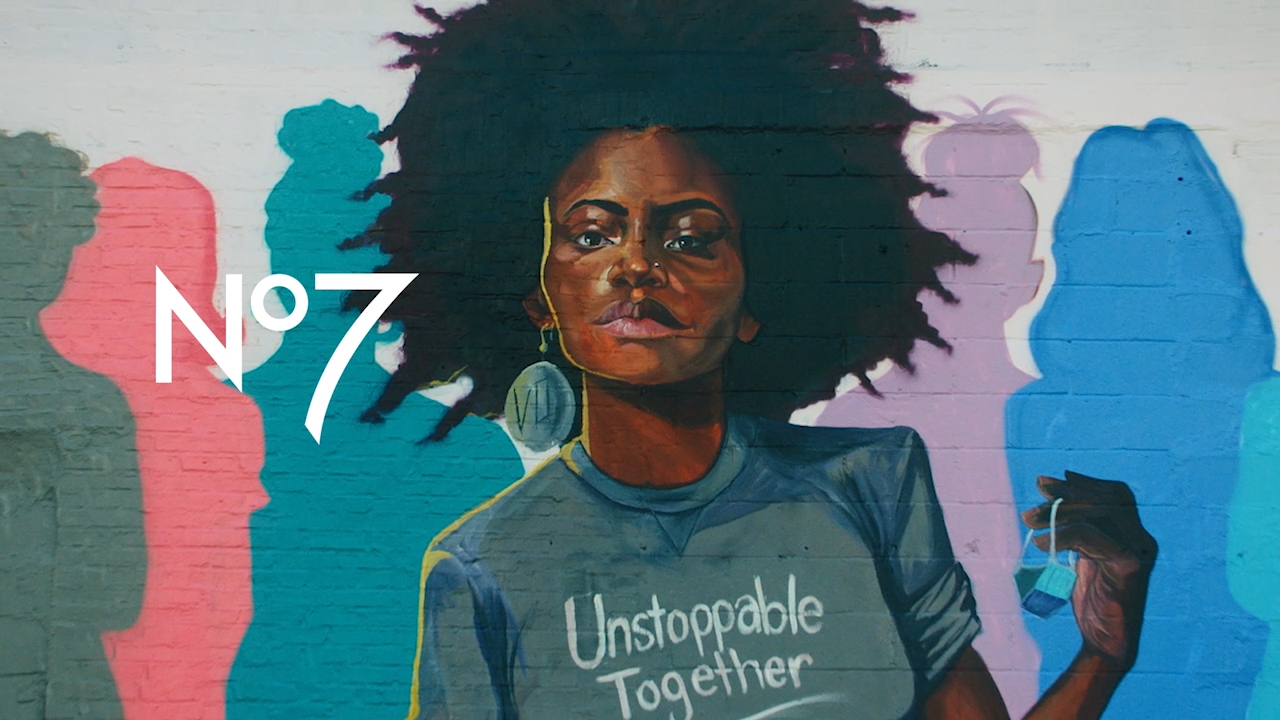 “The response was incredible,” she says. “You're giving people what they need, and you didn't even know they needed it, and they didn't know they needed it until they see it. Everyone experiences a feeling of freedom when they see a big, Black, beautifully loud, colorful woman with her hair out the way she wants. She has her homegirls behind her. It says that females are not exclusive. We're not an exclusive community. We’re unstoppable together.”

The success of James’s project led to Walgreens Boots Alliance requesting her help in bringing its 2020-2021 Diversity, Equity & Inclusion Report to life. The report itself releases information on the company’s progress toward its goals of fostering an environment of diversity and inclusion, both as an internal workforce and retail pharmacy destination. James was game to take on the project, which, in her eyes, was an opportunity to put WBA team members on display after a challenging year.

“My impression when meeting the team was that WBA was really present during the last year,” she says. “Through all of the chaos and protests, stores were open and their team members were working. They were diligent in making the world a safer and better place, no matter what market. And folks are different in all of your markets. So I wanted to show that the people who work at this company look like the people in their communities.”

To approach the work, which was completely digital, James followed the same process she does with her murals.

“I start off with a sketch,” James describes. “I use an iPad and an Apple Pencil since the technology is magical. It’s like rendering a real painting. I plan out my specs and how I want things to move and relate with each other. As far as color and design, I pulled from WBA’s brand colors, the red and blues. I made sure to integrate it into the skin tones and folds of the clothes. I really hone in on my color usage around the eyes.” 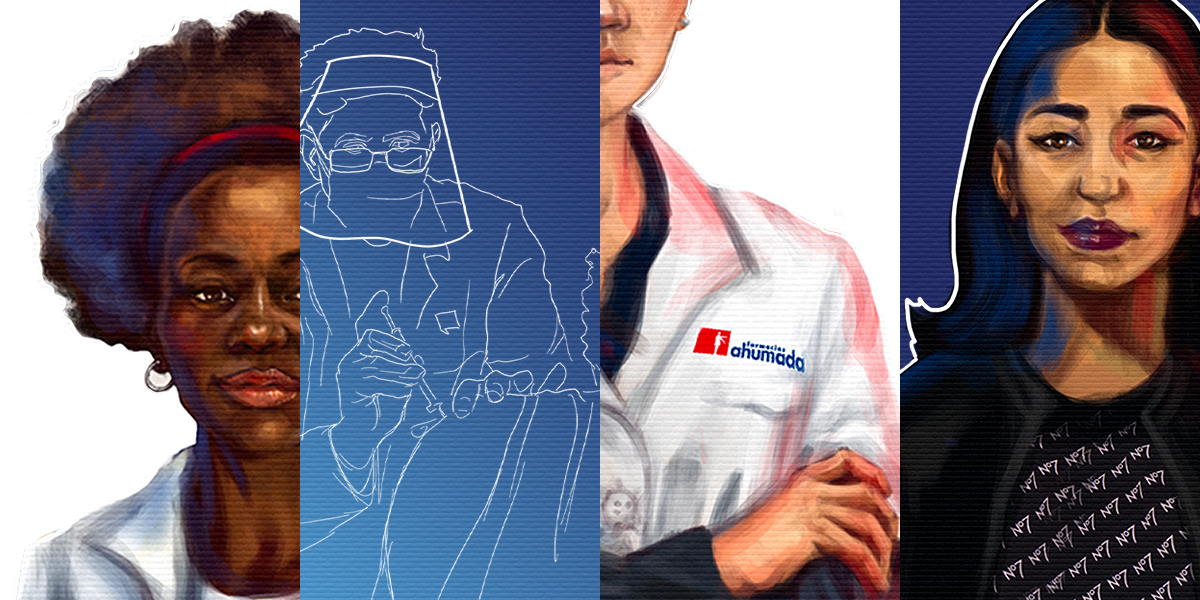 “As an artist, my goal is not to lose the integrity of my work along the way of a project. It’s about compromise, and making the subjects feel like people. When others see my work, I don’t want them to think, ‘Oh, that’s a beautiful woman.’ I want them to look at the painting and have it engage back with them. That’s when I know I’m on the right track,” she says.

The report and James’s artwork, released on Sept. 28, is viewable now in its entirety. From masked pharmacists to female corporate leaders, James captured the diversity of WBA’s global workforce in original figures, with life in their eyes and determination in their poses. She created, as she always does, without sacrificing her personal truth: She is an artist for the people.