Skip to main content
Ten years ago, I was 23 and in that stage of life – right after college, just starting a career – when many young people have a sort of invincible feeling. What could hurt you, right? You’re thinking you have nothing to worry about, especially when it comes to your health.
For several months, I hadn’t felt quite right – nothing so obvious that it stopped my day-to-day life, but I knew something was off.
And then I found out there was, in fact, something to worry about.
I’m a survivor of Hodgkin lymphoma, a common form of blood cancer that starts in the lymph nodes. On Aug. 4, I celebrated 10 years in remission – a big milestone for any cancer survivor.
During my treatment, I was very much of the mindset that “I’m not a sick person – I’m going to live my normal life.” Today, if I got cancer, I’d probably handle it differently, but back then I didn’t miss a day of work. Cancer treatment definitely takes its toll on the body – you don’t feel great. But for me, I saw two options: to shrivel up and take it, or to try to maintain as normal a life as I could. That was my coping mechanism. I didn’t want anyone to see me as sick.
A repercussion of that, though, was that I didn’t truly deal with my illness.
That soon changed. After treatment, having been declared cancer-free, I found myself searching for ways to process what I’d gone through, and to pay it forward somehow. The reality is that when you have cancer, the disease may go away, but the effects never do. It’s always going to be part of your story.
And so I’ve made my story so much more, working with the Leukemia & Lymphoma Society (LLS) every September – Blood Cancer Awareness Month – in preparation for the Light The Night walks that LLS holds in the fall to raise money for blood cancer research and resources. I’d first heard about LLS and Light The Night right after my treatment ended in 2010, and did my first walk in Chicago that October with family and friends. For them, too, it was a way to mark that part of my experience being over, to give back to others battling blood cancers, and to honor those who unfortunately didn’t have the same outcome I had.
I was already personally involved with LLS in 2012 when I started working at Walgreens. Two years later, as Walgreens began partnering more closely with LLS, including becoming a corporate sponsor of Light The Night, I immediately raised my hand and volunteered to be part of growing that relationship – a role totally outside my “day job” here.
Our stories – mine, LLS’s and Walgreens’ – have become intertwined. In six years, Walgreens has facilitated more than $13.5 million in contributions to LLS through sponsor support, employee participation in the walks and customer donations. Walgreens also now has more than 75 LLS-certified blood cancer specialty pharmacy locations around the country, after previously working with LLS to provide advanced training to some of our specialty pharmacists. All of this has amplified not just the message of blood cancer vigilance, but the reach of whom we can care for and how we can care for them.
For paying it forward, I’m in the right place. 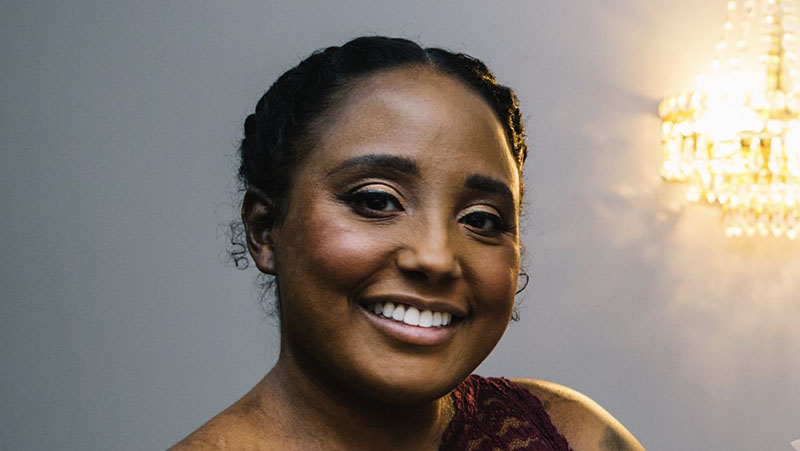 A mystery at first

Before I was diagnosed in 2010, I had a lymph node in my neck that was chronically swollen, and also some lumps under my arms. I visited several doctors, as well as my OB-GYN, who at first sent me to a breast surgeon, in case it was breast cancer. They ruled that out, but then I started to have really bad night sweats and was constantly tired. I chalked a lot of it up to my lifestyle at the time. I worked at a newspaper and did 7 a.m. shifts, and I thought, “Oh, I’m just tired because I’m waking up so early.” But the lymph node wouldn’t go down in my neck, and lumps started to appear in other places. Doctor after doctor would examine me and suspect it was some sort of super-infection, so I’d be on stints of antibiotics. Specialist after specialist would say, “Just try this antibiotic.” And I kept thinking something wasn’t right.

I went to see yet another doctor – this time an ear, nose and throat specialist – and the first thing out of his mouth was, “I’m going to put you on some antibiotics.” I stopped him in his tracks. I said, “I’ve been on antibiotics for six months – it’s not working.” So he took notice and decided they needed to take the lymph node out and see what was going on. He wanted me to get it scheduled very quickly, which made me and my parents nervous. We got it done within a week. Yet even then, I still felt super-invincible, so for the follow-up appointment, I went in alone – although my mom had intuitively stationed my sister nearby in case the news was bad. I was thinking, “Nothing’s wrong.” As the doctor was removing the stitches from my neck, he said, “Well, we got your pathology report back, and you have lymphoma.’ And I said, “Should I be worried?” And he said, “Well, it’s cancer, so, yeah, you should be worried.”

‘Present Brittany’ is the priority

I had a phenomenal doctor who eased our concerns and said, “You never want to get cancer, but if you do get cancer, this is a good one to have because we’ve been treating it the same way for decades.” He told my mom, “I’m going to cure your daughter.” And that’s all she wanted to hear.
My lumps were in many spots, so radiation wasn’t an option; I had to get chemotherapy. The most nerve-racking part is there are so many tests you have to go through – a couple of weeks’ worth – to determine if you’re healthy enough for the treatment. I also was faced with decisions that I was not, as a 23-year-old single person, ready to make. They explained a lot about fertility and what chemotherapy can do to you, and they ask you if you want to freeze your eggs. I was like, ‘Oh, my God, I don’t know what I want to do.’ So I decided I’d let Future Brittany worry about having children – which I fortunately was able to do years later, having two daughters – and Present Brittany could just be cured. I’d push forward and start this treatment so I could be healthy and get this out of my body as soon as possible.
I was fortunate enough to only be in chemotherapy about four months. One day after an appointment, the doctor said, “All right, you’re done.” I didn’t realize it was my last treatment. I said, “What?” He said, “You’re cured.” After that, I did a two-year Rituxan medication therapy, so technically, my treatment was really four months plus two years. I got lucky.

Involved from the very first steps

Every year since our sponsorship of Light The Night began in 2014, I’ve been part of Walgreens’ planning and kickoff efforts. It’s really great to see the evolution. We’ve expanded a great deal, bringing in districts and stores around the U.S. to join in walks across the country. Last year, we had 197 registered Walgreens teams and 1,765 registered walkers. We start with regional vice presidents, who then identify volunteers and local captains for fundraising. It’s really flourished, with customer donation campaigns at the stores and regional competitions within Walgreens to see who can raise the most money.
At our headquarters in Deerfield, Ill., where we plan our involvement in the Chicago-area walks, we’ve always tried to speak to where funds raised for LLS go: research, mostly, but also resources and support services for patients and caregivers. We share this information through kickoff events, historically in September, where we have survivors talk about their experiences, have researchers from LLS come in to educate our team members about blood cancer, and then rally employees to join a walk team in October. In the early days, it was much smaller scale within the specialty pharmacy area of the company – me as a team captain, and I brought my sister on, too, when she started working for Walgreens. But in the last six years, we’ve added executive sponsorship, and it has taken off so much.

In a normal year, Light The Night is unique because the walks are at night with lanterns – that’s the appeal, It’s an awesome visual. Ahead of the actual walk, it’s a party for a few hours. You hear from a lot of speakers, with “honored heroes” on stage, as well as a “survivors’ circle.” In Chicago, Walgreens has traditionally also had a tent where we’ve offered flu shots and given out Walgreens-branded items. Obviously, this year, because of COVID-19 and because many of the people walking have compromised immune systems – since they’re either current cancer patients or survivors – LLS made the determination early that the walks will be virtual. We’ll try to include many of the same elements of celebration in a mass video call, even though we can’t all physically be together.

I always tell people to advocate for their own health – I preach it to anyone who’ll listen. I often think: If I had not pursued my own diagnosis so heavily, where would I be today? If we hadn’t caught it when we did, maybe I wouldn’t have had such a short stint in chemotherapy, or the same outcome. That’s always stuck with me – the “what if.”
Whenever someone I know has a friend or relative who’s been diagnosed with cancer, they always send them to me because they know I’ve been through it. “Can you talk to this person? Can you tell them how you’ve dealt with it?” I tell them about LLS, what I’ve learned from it, what it means to me and my family, and how it has helped the healing process. It’s such a big part of paying it forward. When you’re going through an adverse situation, finding a sense of community can really go a long way.

Brittany Briscoe lives in Chicago with her husband, Nick Twillie, and their daughters, Rowan and Bellamy. You can visit the LLS website for more on this year’s Light The Night events or to make a donation.