When Josh Clossin started at Walgreens 10 years ago, his first task was to get licensed to administer vaccines. Now, with the arrival of COVID-19 vaccines, what was a seasonal component to his job has taken over every minute of the day-to-day operation at his store in Eugene, Ore.

By the time Clossin was assigned to lead a clinic at long-term care facility Willamette Oaks on Jan. 22, he was more than familiar with the process. This assignment, however, was scheduled at an emotional time: Clossin had lost his 98-year-old grandmother that week, and she’d lived in a similar facility. Seeing the gratitude of the residents hit home, reminding him of his grandmother’s own experience during the pandemic.

Because advanced age is attributed to a higher-risk of contracting COVID-19, residents of long-term facilities have been subject to more extreme restrictions. While they might be physically safer, being separated from friends and family can take a mental and emotional toll.

“The past year (before her passing), my family hadn’t been able to visit my grandmother. So I have a personal connection to what these places are like, and what it's been like for families not being able to see their loved ones because they're locked down,” Clossin says.  “When I walked into the facility, I saw a room full of people who were so happy to see us.” 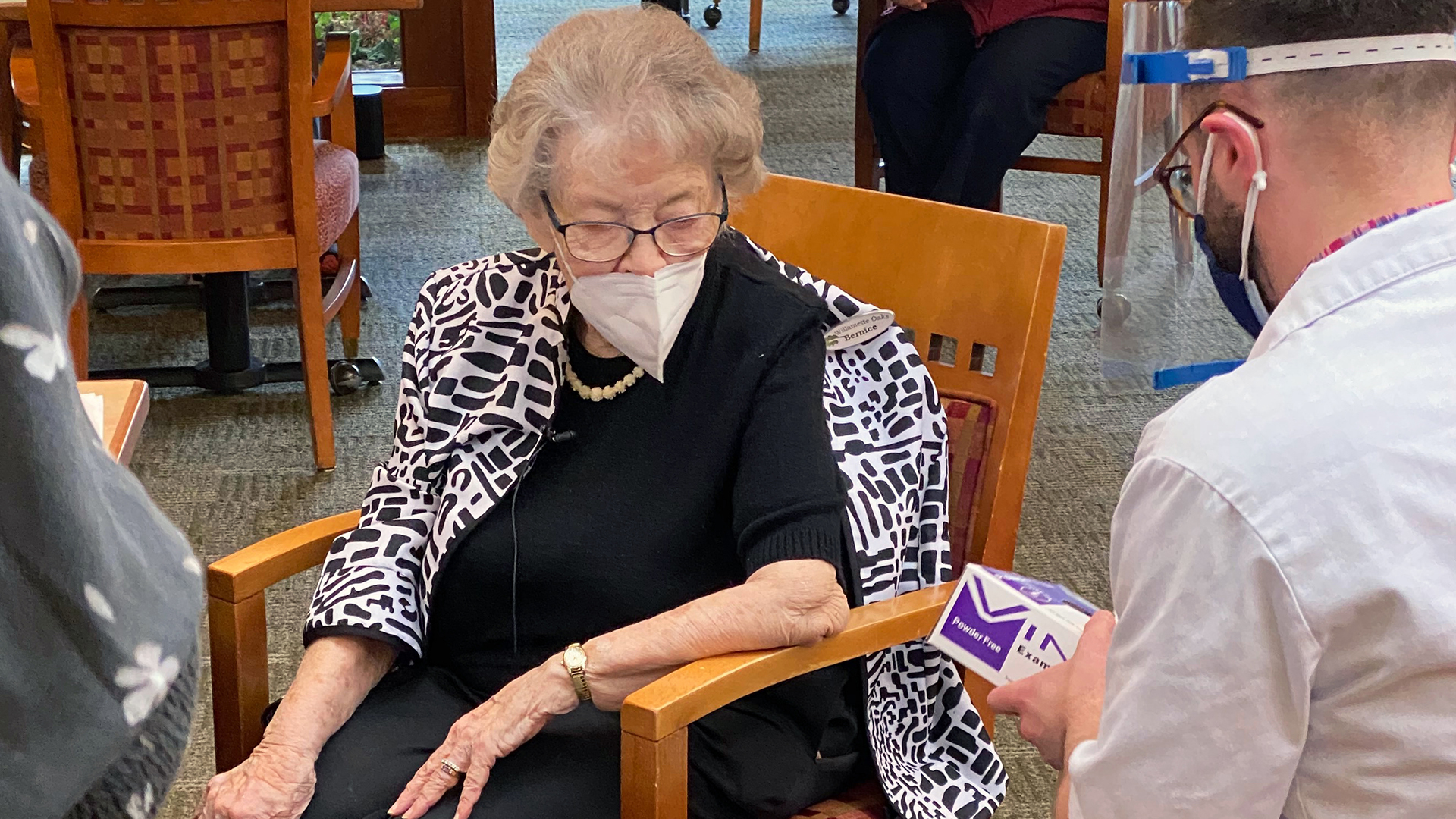 What Clossin didn’t expect, walking into the facility, is that he would meet a woman who was facing the second global pandemic of her lifetime. Bernice Homan, who would soon celebrate her 104th birthday, was born in 1917. In 1918, an H1N1 flu pandemic, more commonly known as the Spanish Flu, would sweep across the world, eventually infecting 50 million people and causing 675,000 deaths in the U.S.. A chilling characteristic of this pandemic, the CDC notes, was the high death rate among young American adults between 15 and 34 years old, which lowered the average life expectancy of the time by more than 12 years.

It’s nothing short of a miracle that Homan, who contracted the flu as a baby, survived.

When news of COVID-19’s spread began to emerge, she was, unfortunately, not surprised. “I knew something like this could happen again. There isn’t much you can do to stop it,” she recalls. “I was a little fearful. At 104-years-old, I could catch something like that again.”

But the opportunity to get vaccinated brings relief. When asked about the day Clossin and the Walgreens team arrived at Willamette Oaks, she describes it as “comforting.”

Clossin remembers Homan laughing throughout the experience and admires her “firecracker” spirit. She gave him high remarks as well.

“I couldn’t even tell I had a shot. I wondered if they had skipped me,” she jokes.

Homan wasn’t the only fan of Clossin and his team: several residents requested that they personally return for the second round of vaccinations. After having administered the facility’s flu shots in the fall, the team knew the residents by name. Clossin welcomed the invitation.

“Vaccinations are the only way out of this,” says Clossin. “I’m a bit exhausted now, but I’m just so glad I’m helping people get back to spending time with their families, and to feeling safer in the world.”

Just as Clossin is motivated by the proverbial light at the end of the tunnel, so is Homan. In her 30 years of living at Willamette Oaks, this is the first in which she hasn’t left the facility once. She, like her neighbors, were looking forward to resuming visits from loved ones and an array of group activities like book club, drum class and line dancing. Ahead of the second vaccine appointments, a sense of excitement had been steadily growing throughout the facility, bolstered by Homan’s birthday celebration. Balloons and cards filled her apartment, and a special dinner was served on her big day. But the real gift, she says, was getting her second COVID-19 vaccine dose.