Chris Waiters can’t tell you which came first: being Black or being gay.

Waiters grew up in an interracial family – his dad is Black and his mom is white. As a child, he loved to play with dolls and other activities generally cast by society as “feminine,” and he remembers feeling like it was something he had to hide. “Boys will be boys” was a phrase that wasn’t necessarily spoken out loud in his family, but it was one he understood.

So he started playing sports instead. And he made a ton of (straight, white) friends. But he felt like he was never able to fully be himself. 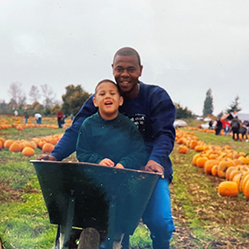 “I grew up in Florida in a neighborhood where my dad, brother and I were the only people of color,” says Waiters, now an asset protection partner for Walgreens in the Washington, D.C. area. “I knew as a child that I was gay, and I struggled a lot with not being able to find anyone who looked like me – who was like me – to help me go through my journey. For me the biggest question was, ‘How can I connect that I’m Black and I'm gay?’”

Waiters questioned himself a lot through his teenage years – Is it OK to do this? Is it OK to look like this? He didn’t have the support systems or resources to rely on for answers, so he continued to suppress who he was while he struggled internally.

Intersectionality is a term we hear often, more so during Pride Month, but it means more than what makes up one’s identity: race, class, gender, sexual orientation, religion and other markers. Intersectionality also refers to the prejudices an individual faces because of these traits.

Waiters uses the pronouns he/him and identifies as a gay, Black male. To him, intersectionality is a cross between who you are and how you identify with your life and your culture.

“I think when we talk about intersectionality in today's society, you have to first understand why it’s important: so people can express themselves, identify themselves and show who they are,” says Waiters. “I struggled a lot with this in my youth. So who I am from a cultural perspective and an identity perspective really helps me relate to who I am today.” 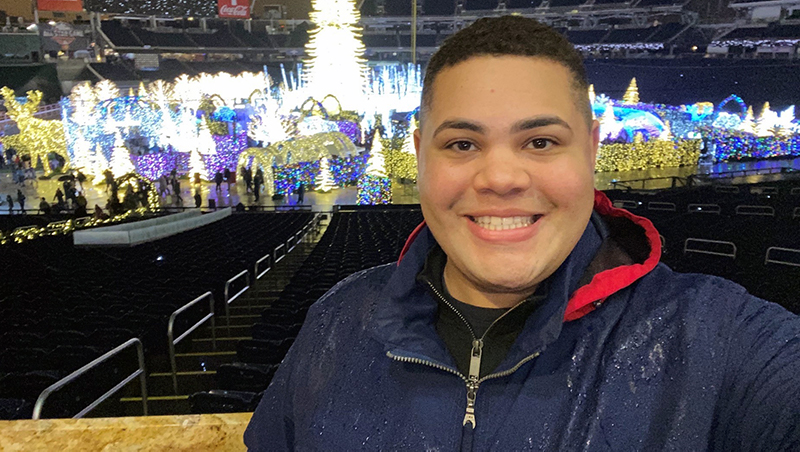 As part of a never-ending quest to learn more about who he is, Waiters decided to attend Bethune-Cookman University in Daytona Beach, Fla., a historically black college and university (HBCU). His time there gave him a better understanding of his cultural background.

“It was a really eye-opening experience of what it's like for so many different people of the African American community, and how others have conquered their own challenges, whether they are straight or gay,” he says. “Someone who identifies as a Black female, for example, might be looked at differently than somebody else, or someone who’s a gay, Black female might have it even harder because she's looked at even more differently. So to go to the HBCU and connect with all kinds of people really helped me understand there were others I could relate to and learn from about who I am as a Black man.”

Coming out of his shell

Waiters came out during his last year of college. Initially, to just close friends.

“It wasn't until I was 25 when I realized I had to start living for who I was and that I couldn’t continue to wear this turtle shell and just never authentically be open and honest with myself about who I am as a Black, gay man,” he says. “When I came out, I had a ton of friends who already knew. They knew my whole life, through middle school and high school, and they just waited for me to come out and be who I am.” 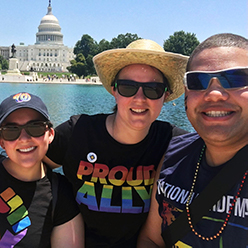 After college, Waiters moved to Orlando, Fla., where he met an entirely new community of accepting, welcoming people in the LGBT+ community, many who remain his closest friends today.

“I met a bunch of people in Orlando who were gay, lesbian, Black, white, Latino – they were every different race and ethnicity,” he says. “I felt like I had finally met my community, and I never felt so at home. These people had been through what I’d been through, and we bonded over our shared experiences. They really helped me come to know my true and authentic self.”

Waiters was living in Orlando at the time of the Pulse shooting in 2016, when a gunman killed 49 people and wounded 53 more at a gay nightclub. Waiters lived less than two miles away from the club.

“At the time, I was out to close friends and everyone around me, but I was not out to my family,” he says. “The day after the shooting, I woke up to millions of texts and calls asking if I was OK. I think that's when it really hit me because the people who were worried about me were the community of friends I had made in Orlando, and we all cared about each other. These are the people who, as we like to say in the LGBT+ community, are your chosen family.”

Waiters describes the environment he grew up in as one where “you couldn’t be Black and gay.” So the idea of coming out to his actual family filled him with fear.

“Being gay was just not something that was spoken about in my family, so I knew it was something I never wanted to bring up with my dad in case it would damage our relationship,” he says. “I'm very family oriented, so it was always something in the back of my mind. What's going to happen when that day comes?”

When that day came, his dad’s reaction surprised him.

“When I came out to my dad, he was actually the most accepting of my family,” says Waiters. “He told me, ‘There are going to be challenges with you being a biracial, mostly Black, gay man, but we’ll work through those and find different ways of coping and moving forward.’” 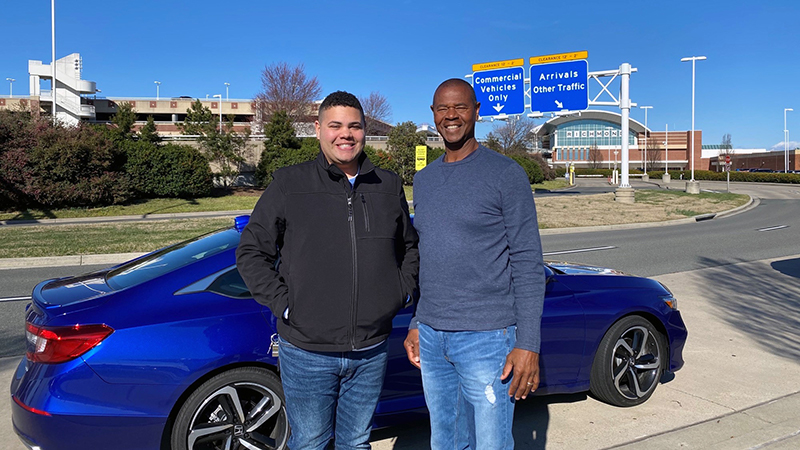 Waiters admits that even today, at 30 years old, he still has some difficulties connecting the dots of being Black and gay, maybe even more than he did as a teenager, when he says he wasn’t being his authentic self.

One situation in particular stands out to him – and the wound is still fresh.

“About six months ago, there was an event here in Washington, D.C., where I was confronted by an aggressive customer who called me very derogatory, vulgar words about my identity as a Black, gay male,” he says. “I had never been called these words in my life, and I was so taken aback. I've heard stories from my father and my family of how life is sometimes for a person of color, but to experience that firsthand was very traumatic. It made me step back and think. Am I displaying too much? Am I being too authentic? At the end of the day, I realized I am who I am, and this is my life.”

Still reeling from the event, Waiters turned to his dad for support.

“When I told my dad what the gentleman had called me, he knew what to say and how to rectify the situation having gone through it hundreds of times himself,” says Waiters. “He reassured me and told me that I'll get through this and I’ll be OK. Even though my father doesn't relate to the LGBT+ community, he has taught me so many things as an African American male, including the experiences he had growing up during segregation, while always pushing me to be better and live my authentic life. He’ll always be the person I can look up to and go to.”

Another person who’s always in Waiters’ corner? His fiancé.

“After I came out, I thought I would never be with someone or be able to find happiness,” he says. “I struggled for a very long time trying to figure out who I was and how to live my life, and relationships were new for me.” 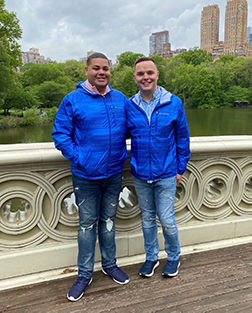 But, admits Waiters, telling his family about his partner – who identifies as a white, gay male – was another challenge.

“It goes back to that family setting where you couldn’t be Black and gay,” he says. “When I first brought it up, there was still a generation on my dad’s side that wasn’t well versed or well educated on it. At the end of the day, it’s your family and you want to be able to express these things to them. But as long as you're happy, you can move forward. And I am happy. My partner and I have been together for four years, and we just got engaged this May.”

Waiters says that suppressing who he was when he was younger is something he wishes he could take back. It’s also something he loves to talk about today to youth or other people who may be struggling with their identity, including his fellow Walgreens team members.

“One thing I thoroughly enjoy about my role at Walgreens and being in the Washington, D.C. metro area is that I’ve met young, Black, gay men who also work at Walgreens who have not seen people like them. And I get very emotional when I think about that,” he says. “I try to encourage them to be their authentic self and live their life for who they are and what they want to be.”

When a communications lead position opened up on the board of the global Pride Alliance business resource group at Walgreens Boots Alliance, Waiters jumped at the opportunity to engage with more local team members who may not know about the resources and activities available to them at work.

“My team and leadership have encouraged and supported me to be my true, authentic self by making me feel included,” he says. “Joining the Pride Alliance board has been great. This, for me, is really what I love doing – working with others like me to bring about a better, more inclusive work environment for all team members at Walgreens and WBA.

“If you are someone who is struggling with identifying who you are, whether it's from a racial or an identity perspective, don’t be afraid to find someone who is like you, or who has been through an experience that you're going through. If you can just start to have that dialogue, you’ll begin to figure out the puzzle pieces of who you are and how they fit together to make you, you.”