An industry that could once be described as “50 shades of beige” – referring to the historical lack of diversity in foundation ranges – has made great strides toward inclusivity in the last several years. Gone are the days of single-digit shade ranges, replaced with anywhere from 20 or more hues to choose from.

And it's a beautiful thing for women who have long struggled to find foundation or concealer that matches their skin tone – a well-documented issue for Black women, but also a common complaint among women of many other ethnicities. 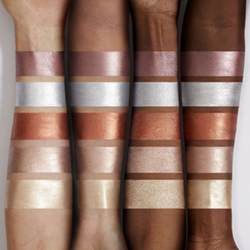 The struggle was real in 1985, when a beauty entrepreneur in East London noted that women of color were underrepresented in the cosmetics market and decided to fill the gap. Created for all skin tones, Sleek MakeUP offers high-pigmentation color cosmetics that pop on light and dark skin tones and everything in between. And with foundations in 24 shades, it offers one of WBA’s most extensive ranges among its global beauty brands. Inclusivity has always been at the heart of Sleek, in great value, high-quality products that celebrate all women and men, readdress the balance of beauty norms and challenge stereotypes.

Still just a twinkle in WBA’s eye, Sleek wasn’t acquired until 2015. Today, the brand is sold in 15 countries and more than 2,200 stores globally, including Boots.

Music – like makeup – is a creative outlet that allows individuals to express themselves. Sleek believes in supporting and championing up-and-coming talent from all backgrounds on their journey to success, helping show that the obstacles you face should not stop you from being seen, heard and felt exactly how you want to be. Encompassing this spirit, the brand partnered with Refinery29 to create “Off The Record,” a documentary series giving a voice and shining a spotlight on four inspiring woman of color who are considered to be rising star talents in the music industry. The series explores how they navigate the challenges of working in a male-dominated industry while paving their own path despite stereotypes that may have worked against them.

In Episode 4, DJ and radio presenter Alia Loren says she hasn’t always felt comfortable expressing herself. Growing up in London as part of a close-knit Arab family, she felt a culture clash between her life at home and the Western world around her.

“With tattoos and piercings, I don’t really fit the ‘norms,’ especially within my culture, but those are the standards I want to break down over time,” she says. “When I was younger, I felt like an outsider. There was a period when I was trying to find myself, and I learned I am my own body – my own decisions. Taking something at face value doesn’t tell the full story. The invisible things – my emotions, experiences, traumas, personality – that’s the real story to be heard.”

In Episode 3, Ally – DJ, model and creative director – is bringing the confidence with a passion for body diversity. As a plus-size woman of color and an active person in the LGBTQ community, she says growing up with European beauty standards made her constantly try to be something she wasn’t.

“I never felt beautiful until I was 19, when I moved to London and it helped me come out as my authentic self,” she says. “It’s a journey, but where I am now is incredible compared to before, and I love every part of myself and the progression of my growth. I actively talk about it online so other women can feel more comfortable with themselves, too. It’s important to put faces out there that real people can love, trust and relate to.”

In Episode 2, meet Parris OH – a fast-rising music-lover determined to raise the stakes in the music industry. Ever since she was young, she’s had a love for music and a passion for grassroots talent. After college, she applied for only one job: a music internship at Sony. And it’s a good thing she got it. She rose through the ranks during her five-year tenure, and took on a new role as a music publicist for London-based Wired PR this spring. Building others up, rallying for representation and supporting those around her are what she lives for.

“Being a Black woman in any industry, but especially the music industry, is a very different experience than anybody else will have,” she says. “I want to see people who look like me get opportunities.”

In the first episode, meet Jamz Supernova, who has always had a passion for DJ’ing and an ambition to match. Weaving between UK bass, funky, grime, hip hop, Jersey club and global sounds, her mix of genres has led to her hosting two weekly shows on BBC Radio 1Xtra – a platform to pioneer and showcase new talent across the forward-thinking soul and electronic spectrum. Not only has Supernova launched her own record label, Future Bounce, but she also created DIY Generation, a radio segment featuring young people owning their careers and going against the status quo.

“With DIY Generation, it’s important to me to show people of color as business owners and entrepreneurs as a way of paying it forward,” she says.

Watch for more episodes in the “Off The Record” series coming this August.