This year has been a challenge for all of us – front-line workers, parents, children and everyone in between. And as the conversation continues about when (and how) school will start up in districts across the country, another group that faces a unique set of challenges is teachers.

Last year, through WE Teachers, we partnered with Mental Health America to create modules and curricula to help teachers address critical social issues with their students. Now, between the coronavirus pandemic and the questions raised by racial equality protests across the nation, teachers need all of the support, tools and techniques they can get. WE Teachers supports them through these free resources.

We spoke with Jessica Kennedy, chief of staff for Mental Health America, about a new WE Teachers module coming this fall for schools that use the program. This one focuses on diversity and inclusion training and is designed to help teachers understand all the potential environmental factors that might be affecting their students in and out of the classroom.

Can you tell us a little bit about the new module?

Kennedy: “A lot of schools have social and emotional learning and some coursework focusing on mental health in school, but what you’re hearing from a lot of teachers is, ‘What can I do directly?’ So all the modules we’ve created have things every teacher can add to their toolbox, framed around the idea of the trauma-informed* classroom and the idea that you don’t just look at people and ask ‘What's wrong with them?’ You don’t jump to the conclusion that the kid who’s acting out is a bad kid. The modules get teachers to take a step back and reflect: What are the circumstances surrounding this student’s life that have led them to where they are? What happened to them? And what is currently happening to them? We applied that lens to earlier modules on mental well-being, bullying, poverty and violence, as well as this one on diversity and inclusion.

“The idea with diversity and inclusion – because we talk about that a lot – was to really understand what that means from a trauma-informed perspective. People who belong to marginalized communities experience a level of trauma and distress as a result of belonging to those communities – and especially children, who don’t always have the same coping skills, years of experience or sense of identity that adults have. They can’t always verbalize what that means or what that feels like.”

*Note: ‘Trauma-informed’ refers to a classroom set up to help teachers work with students who have experienced – or are currently experiencing – traumatic situations, including taking preventive measures to help protect these students from further trauma. 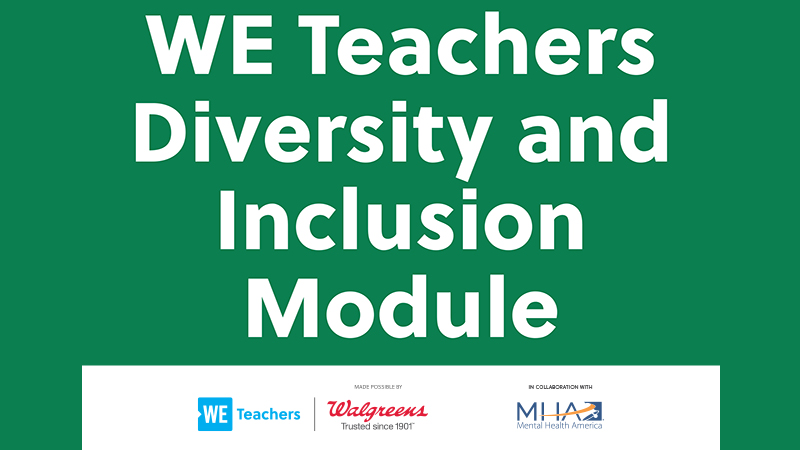 So how do these concepts of diversity and inclusion and the trauma-informed classroom work together?

Kennedy: “The key part of it is that, when we talk about race and ethnicity, we’re also understanding the contextual and societal issues surrounding race and ethnicity. To really be trauma-informed, you have to understand trauma not just as a result of acts of violence or a history of abuse, but also as intergenerational trauma and specific trauma that comes with just belonging to certain groups – and that historical adversity translates into socioeconomic disparities. You need to take the trauma-informed perspective that the current socioeconomic disparities are a result of centuries of slavery, of segregation. Racism and negative stereotyping have an impact on people. What a parent has to tell a black child versus a white child about interacting with police is very different, and it’s important, I think, for educators to step back and really understand the implications of that.”

What did you see in the current classroom landscape that made you take this approach?

“When you’re looking at transgender students, for instance, the rates of suicide attempts and deaths by suicide are through the roof. It’s so hard for those students. They don’t feel safe. They report that they’re bullied frequently but that people don’t understand them. We hear all the time from young transgender people about how, often, when they try to share what they’re feeling, they’re told it’s just a phase, or people don’t understand. Even something as simple as pronoun usage, when some people just don’t want to use a transgender student’s preferred pronouns – that’s traumatizing every time it happens.

“In certain groups, especially marginalized groups, suicide rates are climbing.  We’re even seeing the suicide rate among young Black males, which for years has been lower than other groups, increasing at troubling rates.

“You can’t talk about mental health and not talk about diversity, inclusion, equity, racism and prejudice, because if you don’t, you’re not getting the whole picture.”

What are some specific issues in the classroom this module can help teachers with?

Kennedy: “One is laying out proper definitions and nomenclature so people can understand exactly how to use gender pronouns, including some of the gender-neutral pronouns such as they/them or ze/zhe. Talking about how you’re specifying pronouns for anybody makes everyone feel more accepted. Another is talking about disability status and disability as a term of diversity, and making sure we’re highlighting the fact that there are a lot of disabilities that aren’t visibly apparent at first glance. The first section of the module really gets everybody on the same page in terms of vocabulary, and also addresses the difference between intentional bias and unintentional bias, discrimination and prejudice.

“And then we want to explore how teachers can support diversity and inclusion in their classrooms. There’s a section on how to be an ally, introducing contextual societal issues that teachers should keep in mind, then helping teachers understand how to address them. An example we include is being mindful of the images you use in your classroom and making sure you’re using a variety of racial and ethnic backgrounds when drawing pictures or sharing photos. And then, when you’re doing that, are you also avoiding cultural stereotypes? An example we see a lot of times is with Native American or indigenous people; the photos in class materials will often show somebody either in traditional dress or in abject poverty, when the truth is that’s not representative of the real world. This happens with race and also with gender. If you’re using photos and examples of occupations, are you portraying men as doctors and women as nurses, and kind of feeding into that stereotype?

“Immigration status – that’s a big one. the module talks about what a teacher might do to support students through various immigration statuses and what to do for students being bullied about something like that.

“And finally, we do spend a fair amount of time talking about allyship and privilege, and understanding it and recognizing yourself.”

What’s an example of one of the exercises in the module?

Kennedy: “One of the activities is #MyStoryMyWay. It came from a campaign we used in July 2019 at Mental Health America for what we then called Minority Mental Health Month, which we reframed this year as BIPOC (Black, Indigenous and People of Color) Mental Health Month. One of our philosophies at MHA when we engage marginalized communities is that it’s really important to lift and elevate people’s voices and have them speak in their own words and share their own experiences and be heard and validated. So with #MyStoryMyWay, we’re encouraging teachers to ask themselves and their students, ‘What are the most important parts of your identity to you?’ –because everybody has something different they see themselves as – and ‘What keeps you from talking about your experience? What are those barriers?’  ‘When you were struggling, how did you know something wasn’t right, and how did people around you respond?’ People react to every situation differently, and this provides an opportunity for them to think and reflect.

“And then, after they’ve gone through and reflected on the experience, we ask them, ‘How would you tell your story?’

“We try to come up with as many materials like this as possible. A lot of the time, people from marginalized communities find they just aren't being listened to, right? That’s the key barrier. The world isn’t always listening. Anything we can do to help people tell stories and share stories and get them out there is really important.”

Walgreens Boots Alliance is deeply committed to the diversity, inclusiveness and the equal treatment of all people – a commitment that's demonstrated in our work with organizations such as Mental Health America and programs like WE Teachers.

WE Teachers is a free program available to all teachers across the U.S. and Puerto Rico. For more information, or to sign up, visit Walgreens.com/WETeachers.