We call it Black History Month, but let’s face it: It’s been an entire year of groundbreaking Black history.

Considering all that’s happened, it’s important to pause for a moment and reflect on what we’ve witnessed; what we’ve lived through.

While the pandemic and the racial equity protests immediately come to mind (the struggle), let’s not forget the many historic glimpses of sunshine that have occurred during this storm (the progress).

We saw a woman inaugurated as the U.S. vice president for the first time. That’s historic by itself. But Vice President Kamala Harris is a Black woman who also has South Asian ancestry. She went to Howard University, a historically Black college. She is a member of Alpha Kappa Alpha, the country’s oldest Black sorority. Watching her take the oath of office was groundbreaking, emotional and inspiring for Black Americans everywhere.

People from around the world joined the Black Lives Matter protests last summer in an inspiring show of unity. From small towns in Illinois to the streets of Paris, non-Black protesters marched in solidarity to reinforce the humanity of their Black brothers and sisters.

As a result of the racial equity protests, corporate America had to act. Since May 2020, Fortune 1000 companies have committed $66 billion to racial-equity initiatives.

Walgreens Boots Alliance has made history, too. We named the first Black woman to our board of directors (Valerie Jarrett), and named Roz Brewer as our new CEO, making her the only Black woman today to lead a Fortune 500 company. We’ve implemented a leadership accountability model aimed at driving diversity and inclusion throughout the organization by tying incentives to the company’s diversity goals.

The progress WBA has made in diversity, equity and inclusion did not happen overnight, nor was it because we’re reacting to the movement. Our progress is built on a foundation of hard work, determination and commitment. Building that foundation has taken years, and while it’s no longer on sinking sand, the building has not finished. 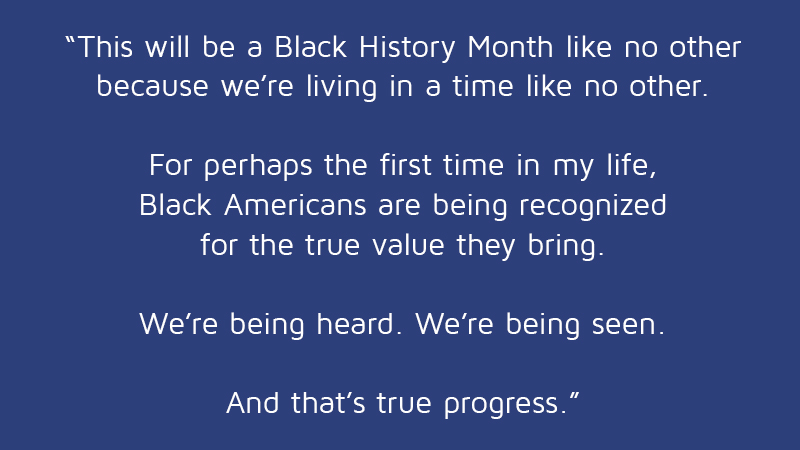 As this month kicks off, I recognize that this will be a Black History Month like no other because we’re living in a time like no other. For perhaps the first time in my life, Black Americans are being recognized for the true value they bring. We’re being heard. We’re being seen. And that’s true progress.