During the quiet, 45-minute drive from my home in Chicago to Walgreens’ drive-thru COVID-19 testing site in Bolingbrook, Ill., I pass an overhead sign on the highway. It says “FLATTEN THE CURVE” in big, glowing letters. Each morning, like an angry alarm clock, it acts as my wake-up call. I see it and think, how am I flattening the curve today? And I have a good answer: I’m a Walgreens pharmacy manager who’s volunteering at the company’s testing sites in Illinois, performing a role that pharmacists have never played before.

One Saturday night in March, around the time the stay-at-home order was issued for Illinois, I received a phone call from my health care supervisor. My first thought was … isn’t it 7 p.m. on a Saturday? But then he said, “Do you want to be part of our first group of pharmacists to help test patients for COVID-19?” Of course I did. The role of the pharmacist continues to expand, and this would allow us to keep advocating for that. Plus, when’s the last time we had a pandemic? I couldn’t pass up this once-in-a-lifetime opportunity to help patients during such an important time.

On Monday, all the volunteers – Walgreens pharmacy managers, district managers, health care supervisors and corporate support staff – attended a webinar to talk through how the initial testing was going to work. We had some really good discussions and were able to give feedback on the process. We kept saying, “What if this happens? How can we make it more patient-friendly?” Four days later, after additional training and on-site walk-throughs in partnership with the U.S. Department of Health and Human Services (HHS) and other government regulators, we had the first Walgreens drive-thru site up and running in Bolingbrook. Since then, Walgreens opened an additional testing site in Chicago and announced plans to open COVID-19 testing locations in 49 U.S. states and Puerto Rico. (Editor’s Note: At press time, Walgreens has opened 18 COVID-19 testing locations across 11 states, and will continue working with the Administration, federal health agencies, and state and local authorities to get additional sites up and running.)

I was at the Bolingbrook location almost every day for the next 2½ weeks, working 8 a.m. to 5 p.m. In addition to helping get the cars in line and making sure patients were registered, I also helped oversee the testing. The initial tests were nasopharyngeal – using a swab that goes through the nose to the back of the throat – but we’re now using Abbott’s new ID NOW COVID-19 test, which is self-administered by the patient. This type of testing isn’t something we typically do in a retail pharmacy setting. Another thing we had to learn was the donning and doffing of personal protective equipment (PPE) – how to put it on and take it off correctly – to make sure our exposure risk is at a minimum. We do learn that in pharmacy school, but don’t practice it on a daily basis in a retail setting. Being at the site every day was scary in the beginning because the virus was growing so exponentially, but after I realized we had PPE, were properly trained in how to use it and were practicing social distancing, I felt safe. It’s always safety-first, and I feel confident when I’m there.

Currently, my weekdays are spent at my normal Walgreens – a community-based specialty pharmacy in Chicago – so that I can still balance the workload across my team. My weekends are spent at the testing sites. The work environments are obviously different, but I’ve also noticed some similarities. The way we collect and verify a patient’s information is similar to how we would do so at a flu clinic or other remote location. And because the new tests from Abbott are self-administered, I find the process to be a lot like patient counseling. While the patient is in their car with the window rolled up, I’m outside demonstrating how to perform the test, observing them and guiding them through it. It's like reviewing a new prescription with a patient to make sure they understand so they’ll be adherent.

On being called a hero

The word “hero” has come up a lot. When the HHS updated guidance to authorize pharmacists to order and administer COVID-19 tests for the duration of the crisis, they called us “heroic health care workers.” We’ve also had several Walgreens leaders visit the testing sites not only to say that we’re making an impact, but also that we’re heroes – that we're saving lives. Even if we’re just taking down a patient’s information, no contribution is considered small or insignificant in helping to control this pandemic.

Every night when I get home from work, I remove my clothing right by the door and put everything in a garbage bag. I drop it straight into the laundry, without touching anything, and then take a shower. From there, I go back to my semi-normal life of building puzzles or watching Netflix with my boyfriend, or whatever that day of quarantine calls for. He works from home, so I told him from the beginning, “I'm taking on this role, so you're staying home. It doesn't matter if you have symptoms or not. I need to make sure we’re both healthy.” Because I’m still going to work, I’m also doing our grocery shopping so he doesn’t have to travel anywhere. And in return, he watches my puppy, Mila, a teacup Maltipoo, during the day. She's such a good girl, but I’m gone for 10 hours a day, and I would hate for her to be alone. So that’s why we decided to quarantine together. Even if we’re going a little stir crazy, at least we have each other.

A lot of the volunteers didn’t know each other before this started. We’re from different districts and areas, but we’ve gotten to become our own little family. We’ve been learning from each other and building on one another’s feedback in a very positive way. As the situation has evolved, we’ve also been constantly enhancing our processes, which is great because it has made us a well-oiled machine. I worked at the Chicago testing site last weekend after having been at my regular Walgreens all week, and it warmed my heart that the other volunteers welcomed me back with open arms, so to speak. We have a group text message going so we can easily communicate with each other when we’re not together. Sometimes it’s as simple as seeing if anybody needs anything or figuring out who's bringing coffee for the day. Teamwork is a good thing that we have going.

Some people might be thinking, why would I volunteer for this role? My answer is so I can feel more in control of the pandemic. I'm not the type of person to just sit back and wait for things to happen. I want to help in any way possible. And to be honest, every single time I’m at the site, in my head I think, what does this mean for the future of pharmacy? If they're allowing us to do this now, maybe in the future we’ll be testing patients for influenza at the pharmacy, for example. If the patient tests negative, you give them a flu shot. If not, we have a standing order for a Tamiflu prescription. It's just exciting to think about what’s to come for our profession. COVID-19 might be our greatest challenge, but it’s also our greatest opportunity to shine.

When the announcement was made that Boots is supporting the NHS with COVID-19 testing and the business asked for colleagues to step forward and be the first testers, it was something I absolutely wanted to do to help get front-line staff in isolation back to work.

How I got started

Before the pandemic, my role consisted of recruiting future Boots optometrists. So I must admit, I was a little nervous about what to expect going into the training to become a COVID-19 tester. When I arrived at the testing site in Nottingham on my first day, there were people from across the whole Boots organization who had already been testing NHS staff, and they helped put us new recruits at ease. Our training was led by Clare Thompson, one of our health care academy trainers who’s normally responsible for training Boots pharmacists. She made sure we were trained to the highest standard, had the right PPE and were confident in conducting the tests.

The training really helped to see how this feels for the NHS workers coming to see us, and it’s amazing to think that this simple test can have such a massive impact on fighting the virus. The idea is that if you’re an NHS worker and are currently in isolation with symptoms, the test can determine if it is COVID-19. If the test is negative, and once you are well again, you would be OK to return to work without needing to continue self-isolating.

Enhancing the process day by day

By the afternoon, I was ready to do my first tests alongside my fellow Boots Opticians colleagues from our Nottingham Victoria Centre and Castle Boulevard stores. The Nottingham testing center consists of five drive-thru lanes, each manned by two testers. We have two teams on alternating shifts to enable us to test seven days a week. The test process is quite complex, as we need to follow strict procedures to help ensure that everyone is safe and that there’s no cross contamination. The process is continually evolving and improving, with a debrief session at the end of each shift to give feedback to our logistical partners. It feels great that we have the opportunity to make an impact by providing the testing and by continuing to help enhance the operation as a whole. 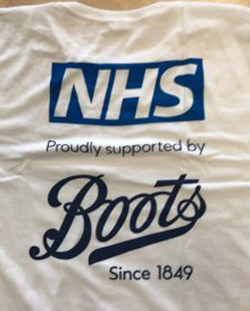 On my second day, I was testing with Morag Punton, senior manager of Corporate Social Responsibility for Boots UK. We worked well together, checking each other’s PPE and alternating the testing of patients driving through. She was proud to tell me about the launch of a great initiative with Boots, The Hygiene Bank and Fareshare to donate products to NHS front-line workers through hospital trusts and to charities across the UK to ensure vulnerable people in need are supported during this crisis. Something she said really struck me: “This virus does not discriminate, but its impact will not be equal.” So it’s really great that Boots is able to support those who don’t have access to essential toiletries, and to be able to support the NHS in yet another way.

Giving and receiving thanks

Over the course of the day, we tested doctors, nurses, paramedics and a whole host of NHS staff. It was incredibly humbling when they thanked us for the work we are doing to help. We all agree that it’s the least we can do. It’s impressive to think that this whole operation was developed and brought to life in only 10 days, and I think this is testament to what our business, the government and NHS can do when we are faced with such a crisis. I’m proud to be able to support our front-line workers as we navigate these unprecedented times. We’re all in this together.