As concerns over COVID-19 increase, most people are focused on the virus itself: the risk to themselves and their loved ones, the potential for disruptions of daily activities and confusion over how to take proper precautions against it. But the current health care crisis isn’t only about the novel coronavirus – it’s also about continuing to manage millions of other health concerns that existed before COVID-19 became an issue.

This became abundantly clear for passengers on the Grand Princess cruise ship, which remained in a holding pattern off the coast of the Bay Area in California for several days due to concerns over exposure to COVID-19.

Like most of us do when we pack for trips, many of these passengers had only packed enough medication to last through the planned cruise. This meant that by last Friday, March 6, about two weeks after they’d expected to be home, a large number of the 3,500 passengers had run out of much-needed prescriptions.

When Anthony Perez, Walgreens regional health care director for California, got a call that afternoon from an acquaintance at the California Department of Health explaining how many passengers were without necessary medications, he understood the gravity of the situation.

“My contact asked if Walgreens would be willing to help, and I told her of course – we’d do whatever it took to figure it out,” says Perez.

By Saturday afternoon, he had spoken to medical personnel on the ship and come up with a plan. Passengers were asked to submit their names, birthdates and any information they could provide about their prescriptions. Armed with nothing but a spreadsheet with this most basic information, Perez now needed to get 400 prescriptions back to those passengers – on a floating ship hundreds of miles from where he sat in Southern California – in a matter of hours.

Perez immediately jumped on a call with what he dubbed a “regional task force,” made up of regional retail and pharmacy supervisors in the Bay Area (the area closest to where the ship was sitting) and Walgreens Support Office leaders in Deerfield, Ill. Hilda Chung, health care supervisor and Bindu Sheth, health care specialty supervisor for the San Jose/Oakland and San Francisco regions, respectively, took the lead on the logistics of filling the prescriptions.

“We split up the list into 200 prescriptions each and decided to take care of them at our 24-hour locations in Daly City and our San Francisco ‘Big Castro’ store, because these locations would be more equipped to handle this type of request on a weekend,” explains Sheth, “But our concern was finding enough pharmacists to come in when they hadn't been scheduled. We didn’t want to put any of our team members in a tough situation. Many have children or family obligations that make it hard for them to drop everything and work on the weekend.”

Those concerns quickly dissipated. Sheth and Chung were able to find more team members than they ended up needing.

“It was touching to me how many people wanted to help,” says Sheth. “There was one pharmacist who was in Tahoe for the weekend, and she called me from her car saying she was driving all night to get there and help in whatever way she could.”

With this tremendous response from team members, Sheth and Chung rapidly compiled two teams of 10-15 pharmacists and pharmacy technicians for each of the two 24-hour locations.

As they worked to fill all 400 prescriptions, the pharmacists and techs realized this was not business as usual. Typically, most prescriptions come in electronically from a patient’s care provider. But in this case, each and every prescription had to be entered manually into the pharmacy computer, adding significant time and labor to every fill. And because all they had to go on was a name and birthdate, every patient was registered as a new customer to ensure accuracy. Pharmacists didn’t have the time or ability to contact every passenger’s doctors to have them re-prescribe medications. But thanks to emergency rules in place in California, this didn’t have to be a roadblock.

“Once a state of emergency has been declared, pharmacists here in California are able to furnish medications in good faith to patients in need,” says Sheth. “Without the state's declaration of an emergency, we would not have been able to help as quickly as we did.”

Team members continued to fill prescriptions, with calls going back and forth with medical personnel on the ship to make sure everything was being done correctly.

“We were on the phone with them constantly, not only to give them support but also guidance, because we wanted to make sure patients received the right medication at the right dose, and with the proper instructions,” says Sheth.

Things easily could have gotten tense – and crowded – at the two stores with so many additional prescriptions to fill. But store managers at both locations did what they could to help keep spirits up, bringing the pharmacy crews food and making Starbucks runs.

“These are small pharmacy areas, and every computer station and space was taken up,” says Chung. “But the coordination and communication between all of the team members was amazing. It wasn’t the doughnuts or drinks that we brought in, but the team spirit that made everyone able to keep going.”

Perez had arranged for the Coast Guard to pick up the 400 prescriptions by 11 a.m. Sunday to then be delivered to the ship. But by 11:30 p.m. Saturday, he got a call that all the orders had been filled and were ready to go.

Because the hand-off couldn’t happen until the following morning, the teams went home to get some rest.

“Several pharmacists and techs told me it was their happiest day ever working at Walgreens, because they felt they were truly making an impact for people in need,” says Chung.

And their efforts weren’t over.

Kimberly Wong, pharmacist at the Walgreens in Daly City, originally was scheduled to have a day off. After working overtime Saturday to help the cruise ship passengers, she texted Chung to make sure there wasn’t more to be done. Chung responded quickly: The ship had actually submitted another list -- this time for more than 1,000 additional prescriptions. Wong’s store would be filling 500 of these – more than double the amount processed at the store the night before.

Wong returned without a second thought, working another eight hours alongside a team of fellow pharmacists, techs and store team members.

“I wanted to see this effort through,” she says. 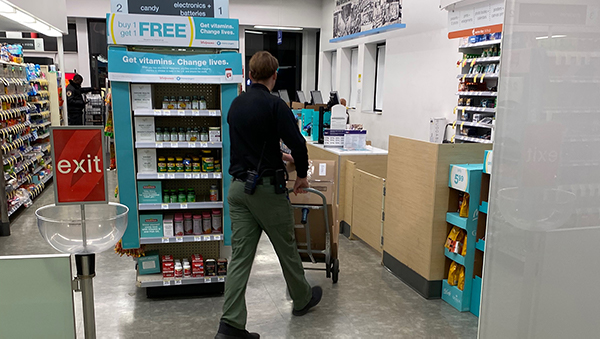 The teams finished in the wee hours of Monday morning, with the filled prescriptions handed off to the highway patrol several hours later. Team members went home knowing that additional requests could come in until the ship had completely disembarked – and that they’d be ready to help whenever and however they were needed. (Note: the Grand Princess came ashore on March 9, and at press time, passengers were in the process of disembarking.)

For Wong, helping out in this crisis felt personal. “With everything going on, I feel like the best thing we can do for our communities is remain calm and know that we need to tackle this virus together,” she says.

Perez’s role often puts him in the center of public health concerns, and while he’s incredibly proud of how quickly the local pharmacy teams mobilized, he’s not surprised at the level of commitment.

“From my perspective, we have team members who will help people when you ask them to help people,” he says. “From the list of medications needed on the ship, it was clear how many underlying health conditions there were among the passengers. The least we could do was get them the medications they need so they can feel better, and not have other health issues to worry about. There was an urgent need, and whenever our people know there’s a need, they show up.”