With six kids, two parents and a box that fits one roll of toilet paper, delivery drones have been stopping by the Merrill household in Christiansburg, Va., as often as four times a day during the pandemic.

The frequent deliveries are partially due to the kids eagerly placing orders for snacks and toys from Walgreens and the parents avoiding trips to the store during COVID-19. But it’s also because the family of eight simply needs to keep the house stocked.

“We have a little tradition called ‘Drone Lunch,’” says mom Kerri Merrill. “It started on a Saturday, and we had to order two drones just to get enough soup for all of us. Now, every weekend, the kids are like, ‘Can we get Drone Lunch?’ We're excited there are more food options now.”

Walgreens and Wing, a subsidiary of Google’s parent company, Alphabet, began a trial drone delivery service for select residents of Christiansburg last October. Since then, this strategic partnership has offered quick delivery of some of Walgreens’ most sought-after health and wellness products, food, beverages and other convenience items. As a form of contactless shopping and delivery, the service has proven to be especially helpful to this community during the pandemic.

Orders on the rise

As COVID-19 spread across the U.S., Walgreens orders via Wing quickly began to skyrocket. Kristin Hintermeister, director of marketing development for Walgreens and part of the project team, thinks it’s because the technology and the types of products offered were exactly what people needed.

“The first thing we did was reevaluate our assortment to make sure we had the items people were looking for during this time,” says Hintermeister. “We expanded our offering to 155 items, including new kid-friendly products such as crayons, markers and games; food staples such as pasta, marinara sauce, canned soup and mac and cheese; and household cleaning supplies such as facial tissue and, of course, toilet paper.”

As panic-buying set in across the country, Christiansburg store manager Sterling Evans began gathering additional inventory of some of these items from Walgreens stores in other districts and even across state lines. “Most Walgreens stores around here only carry two or three items like pasta at a time,” he says. “So I started driving around pulling a few from each store, being careful not to deplete the store of its stock. So far, I’ve driven about eight to 10 hours total.”

Hintermeister began working from home following the start of Illinois’ stay-home order in mid-March, and the mom of two soon found herself desperate for things to keep her kids occupied.

“We kept walking around our neighborhood and seeing everyone outside using sidewalk chalk – coloring, writing thank-you messages, making hopscotches,” she says. “So I suggested adding it to our Wing assortment. Building on this, the Wing team created a campaign where customers could use a promo code for free chalk from Walgreens to draw happy pictures, inspirational quotes or express gratitude for health care workers on the front lines.”

The people of Christiansburg loved it, says Evans, and we quickly ran out of chalk.

“I loved that chalk was selling so well because it meant customers were giving it to their kids, and kids who were at home were able to be out in the sun and just be kids,” he says. “So I started sourcing more from other stores. There’s no other Walgreens that can help their community in the same way we're able to help Christiansburg right now.”

Hintermeister says she feels grateful she can be part of the effort to help people during these challenging times.

“Nobody knows the future,” she says. “When things go back ‘normal,’ I think a lot of people might still be staying home and not shopping like they used to. So for this drone service to really prove itself during this time gives us a lot of reason to evaluate scaling this beyond Christiansburg.”

Here’s what some customers in Christiansburg are saying about the ability to get essentials from Walgreens delivered by drone during COVID-19. 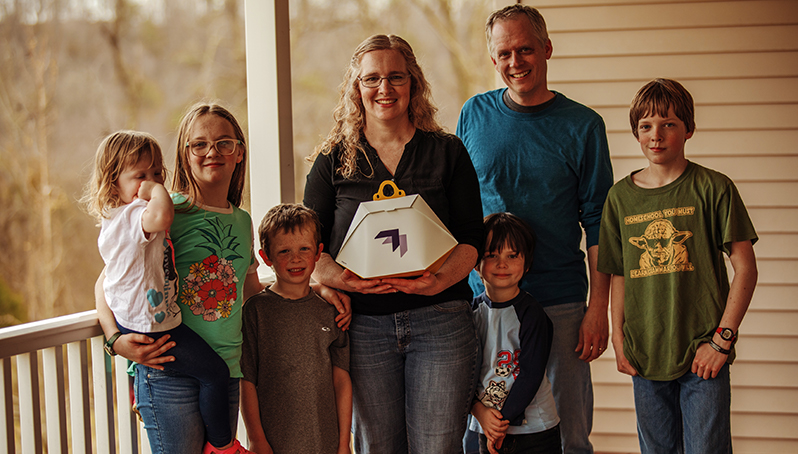 You remember the Merrills – family of eight (eldest son not pictured) with a fondness for drones. Kerri Merrill says in the beginning, before COVID-19, ordering by drone was more of a novelty.

“After it launched last fall, we would buy extra things just so the drone would come to our house,” she says. “We would place the order and go stand outside to watch it arrive. But now with the pandemic, it’s become a necessity. I order groceries online and pick them up curbside, and have not been able to order toilet paper in over a month. So we’ve been ordering one roll of toilet paper by drone every other day from Walgreens.

“We home-school our six children, and my husband has always worked from home. So we're all here, all the time. The kids treat it a lot like a vending machine – ordering a pack of gum, a toy car, some crackers. My husband likes to use it as a snack break in the afternoon. We live in the country, and the kids are outside playing all the time. As soon as they see a drone delivering to someone else’s house, they’re like, ‘Can we order a drone?’ And I'm like, ‘Do you have any money?’

“If you say a drone is coming, they all start yelling, ‘I'm going to get it!’ We have to agree ahead of time who's getting the box or they'll all run and fight for it. We try to rotate. Although they're not as excited when toilet paper comes in the box as they are when it’s candy.

“Days when it’s rainy or windy and the drones can’t fly, I actually feel cut off. It’s given me a sense of connection and comfort knowing there’s still a safe and fast way to get what we need.”

For Zach and Rommelyn Coffren, the pandemic has spurred a search for activities to help them and their son, Noah, 4, feel normal again.

“We both work for Virginia Tech nearby and are currently working from home, and Noah is out of daycare,” says Rommelyn. “We were doing drone deliveries before the pandemic started, so continuing to do that gives us a chance to get outside and helps connect Noah back to our life before this all hit.

“We recently did a movie night in the backyard with a portable projector and a screen. We set up our camping tent, had a little popcorn machine plugged into the deck and wanted some candy. Normally we would just run to the store and grab it, but in a time like this we were like, ‘Do we really need to go out and brave the world to get candy? Probably not.’ So we had peanut M&Ms, a Twix bar and other candy delivered from Walgreens by Wing. We watched ‘Star Wars’ – one of Noah’s favorites right now. It felt perfectly normal, and we had a cool atmosphere with stars above us and a drone bringing us candy. It all kind of fit together.

“Most of what we order by drone is for Noah – the kid’s snack pack, sidewalk chalk – things to keep him engaged and active. From the Wing app, you know the drone is coming before you can actually see it, and we probably get more excited than Noah does. He’s growing up near Virginia Tech, and so we really want to encourage his interest in technology.

“Zach is doing our grocery runs right now, and he gets a little anxious when he has to go out to a store. But even for Noah and me, who aren’t going to the store, there's anxiety for us, too. Zach is out there, he's coming back and we’re like, ‘Make sure you wash your hands, make sure you disinfect whatever you need to.’ With drone delivery, there’s a sense of relief because you don’t have to physically or mentally figure all of those things out.”

Business hasn't stopped for the Hocketts. Tanya works for the Virginia Department of Emergency Management and has been connecting front-line health care workers with personal protective equipment, while her husband, Robert, has continued to provide takeout at his local restaurant. With three kids at home, they’ve been relying on Walgreens and Wing to help keep their family safer and happier.

“With my husband working in a restaurant and me still having to go into the office sometimes, we're trying to stay healthy for ourselves and make sure we’re not spreading anything to anybody else we have to work with or serve,” says Tanya. “But sometimes we just need something quick or want something fun, and we’d prefer to not have to go into any stores and increase our exposure risk to find those things. With the drones, we don’t have to worry about any of that. It just comes right to the house and lands in the yard. 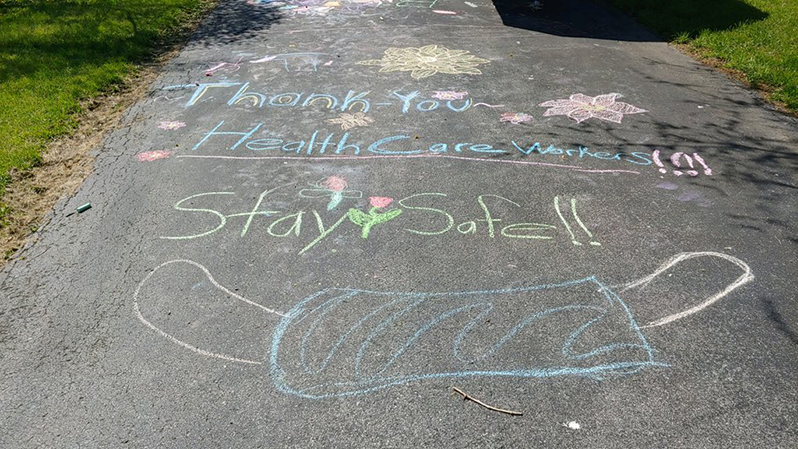 “We use drone delivery pretty regularly. Our daughter Nora is 4, so sometimes when she’s being really good and letting me get on my conference calls without interrupting, we’ll order her an L.O.L. Surprise! doll or kid’s snack pack from Walgreens. The drone flies in, and she loves it. It's just a fun treat she gets to have every once in a while.

“We were excited when we saw the free chalk promo recently. Nora and our other daughter Natalie, who’s 12, decided to draw at the end of the driveway for people taking walks through the neighborhood. It’s a picture of a mask and it says, ‘Thank you, health care workers!!!! Stay safe!!’ I wasn't even home when they did it. It was all them. That was the message they picked.” 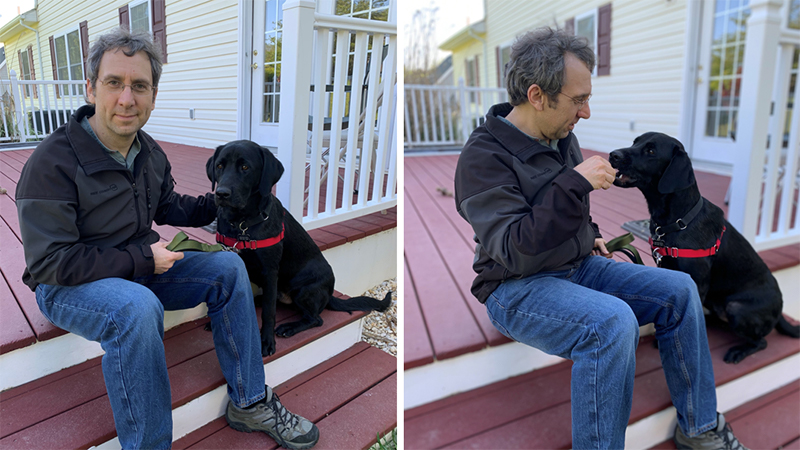 Shane Ross, an aerospace engineering professor at Virginia Tech who uses drone technology as part of his research, recently discovered his dog, Geyser, is also a fan.

“Especially since the lockdown, I’ve been depending on Walgreens and Wing for toilet paper because it's one of the few places you can still get it,” Ross says. “I’ve also used it for Tylenol and juice – things I haven’t been able to get from the grocery store, or other last-minute items. Sometimes I’ll just order something fun like chips or the Starbucks Frappuccino pre-made drink, which I’d normally go to the store for. We’ve been getting drone deliveries three to four times a week. It's a lot easier. Plus, I have asthma, so I'm immunocompromised and I’m trying to not go out as much. It’s made me feel safer because I don't have to walk into a store.

Our family recently adopted Geyser, an 8-month-old black Labrador, and was curious to see what his response would be to the drone. He did great. He has a pretty calm temperament. Next I’ll have to teach him how to fetch the box. He has a good retrieving instinct.

“As part of my work, I use drones for environmental monitoring – taking weather measurements or measuring pollen and airborne diseases. It’s definitely given me confidence in this technology. I also have some hobby drones that I fly. I think there's a lot of interest in this technology and I look forward to it expanding and becoming more available.

“Before the pandemic, I didn’t go to our local Walgreens store often because it’s not really near my house. But because of the drone delivery service, I've probably spent more at Walgreens in the past few months than I have in the past 10 years.”