The recipe is confidential, but the dozens of kids elbowing each other out of the way for a second helping tell you everything you need to know about how it’s received at the Shane Victorino Nicetown Club, one of 16 locations at the Boys & Girls Clubs of Philadelphia.

Johnson is vice president of programs and athletics for Boys & Girls Clubs of Philadelphia. While his official job duties don’t necessarily take his culinary acumen into account, it’s become an essential part of his job these days. North Philadelphia, where the Nicetown Club is located, is one of the area’s largest food deserts, with only one grocery store for hundreds upon hundreds of residents to access affordable healthy food options. Take that, along with the financial hardships for many families in the area, and it’s not hard to see why food insecurity is a major problem in this part of the city, especially among teens.

“It’s a group of kids who definitely see and face hunger on a greater level than younger kids, simply because of all the responsibilities they have to deal with at home,” says Johnson. “So that's one of the things that makes the Shane Victorino Nicetown location so powerful, is that we’re are able to reach these sometimes unreachable middle school- and high school-aged kids and make sure that they're still getting their needs met – including nutritionally.”

Johnson recalls a teen who came to the club in tears one day, admitting he wasn’t eating meals at home regularly. Aside from the adverse physical effects of malnutrition, this also took a heavy mental and emotional toll; he was constantly worrying where his next meal might come from. Johnson created a stockpile in his Club’s pantry, making sure every week that there would be some food set aside for this young man. He even took him to the supermarket on occasion and let him pick out whatever he wanted to eat that week – on Johnson’s own tab. 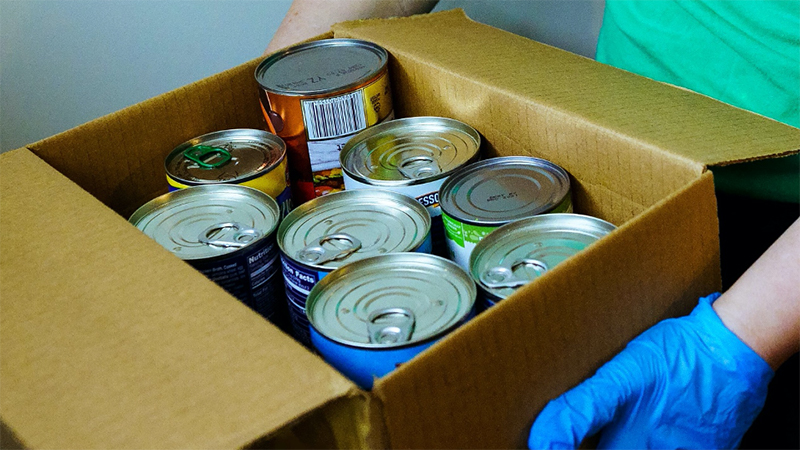 For Boys & Girls Clubs, providing food for young community members and their families who face food insecurity is nothing new. The organization has been well-equipped to handle its typical number of hungry young people over the years, mostly through after-school programs.

But when schools started to close in the spring because of the coronavirus, it exposed a large hole in the area’s social safety net that was felt particularly harshly in North Philadelphia, where 100 percent of the youth that Boys & Girls Clubs of Philadelphia serve are eligible for free or reduced lunch. The difficult circumstances already facing many families suddenly became even more dire.

“When the school closes, so many families really miss the breakfast and lunch they provide,” explains Johnson. “For many families, it's easier to feed a child or a family just dinner, when two of the meals are already taken care of. So we stepped in to provide at least one meal and a snack, to help ease the burden.”

The increased demand for meals means that, lately, the club’s food budget has had to increase substantially. The Boys & Girls Clubs of Philadelphia has served over 17,000 meals since the pandemic began – significantly more than it would in the course of a regular year. Now, with the holidays here (and the pandemic still very much taking its toll), the need has become larger and more urgent than ever. Every year, Johnson makes sure that traditional Thanksgiving and Christmas meals are available at the Clubs, complete with turkey, stuffing, green beans and, of course, Johnson’s famous mac and cheese. But with many more meals being given out this year than anticipated, the budget is getting tight.

“This year, we’re anticipating needing food for 500 holiday meals,” says Libby Lescalleet, vice president of programs, partnerships and development for Boys & Girls Club of Philadelphia. “And, of course, it does come at a cost. Even though we know it’s the right thing to do, we can’t necessarily go to the grocery store and ask for their food for free. It’s an area where we really do need additional financial support.”

Fortunately, that support is on its way – thanks to Comic Relief US and Walgreens customers.

Comic Relief US, a charity Walgreens has partnered with for the past seven years and the organization behind Red Nose Day, is helping organizations like Boys & Girls Clubs of Philadelphia this past holiday season with The Full Plate Project: their initiative designed to provide urgent relief for children and their families facing hunger. In the U.S. alone, an estimated 18 million children have faced food insecurity this year, not knowing where their next meal will come from.

“Holiday meals are a time of amazing abundance for many people,” says Alison Moore, CEO of Comic Relief US. “Whatever holiday you celebrate in the winter, chances are it’s food-centric, so this is something that should be top-of-mind for people: that a growing number of Americans are becoming food-insecure and are missing meals in many cases.”

While Red Nose Day raises money and awareness each spring to tackle every aspect of child poverty, the campaign’s Full Plate Project is a way to narrow that focus to food insecurity, at a time of year when hunger is so evident.

“Child poverty, unfortunately, doesn’t go away at the end of May,” says Moore. “So The Full Plate Project is a way to have a Red Nose Day campaign during this time of year. This way, we can build awareness around food scarcity and raise donations for things like holiday meals at local Boys & Girls Clubs and create better support systems during this time of year around food.”

In order for the campaign to succeed, there had to be a fast and easy way for people all across the country to learn about, and donate to, the cause. That’s where Walgreens came in.

“The collaboration between Comic Relief US and Walgreens has been unprecedented, in my view,” says Moore. “With Red Nose Day, you see a level of engagement, from the Walgreens support office right down to the store level. Leaning into the partnership for this new initiative just made sense.”

A rewarding experience for consumers

Late last year, Walgreens customers across the U.S. were introduced to the new myWalgreens loyalty program.  Among the many changes and updates was the conversion of Balance® Rewards to Walgreens Cash rewards, replacing earned points with earned dollar amounts that customers can redeem later in increments of $1, $2, $3, $4, $5, $10, $20 or $50.

But there’s more than one way to spend that cash.

“We did some research on what customers might want to do with their Walgreens Cash rewards besides redeeming it. What else could customers do with it?” says Michelle Goydan, associate manager for brand marketing at Walgreens. “When we got the research back, it turned out that a lot of people were interested in donating it … which wasn’t a surprise considering how generous our customers have been historically when it comes to supporting charity partners like Red Nose Day. This was a great opportunity for them to join us as we continue supporting local communities together.”

“In thousands of local communities across the country, there is a Boys & Girls Club,” says Lescalleet.  “And in those Clubs, there are hundreds of thousands of kids who depend on everything that is done in their afterschool program, including those meals. If a Walgreens customer can only donate a dollar today, that dollar will help make sure that one of those kids’ basic needs is being met, in the form of a much-needed – and much-appreciated – holiday meal.”

Besides, $1 is an incredible bargain for the best mac and cheese in North Philadelphia.