Our journey with the Global Shea Alliance (GSA) begins in Northern Ghana, where an estimated 600,000 women rely on the shea industry as a major source of income.

Since joining the GSA in 2019, Walgreens Boots Alliance has supported the formation of a cooperative of female shea harvesters in Ghana, including legal registration of the cooperative, election of leaders, creation of sub-committees and training more than 800 women in cooperative and business development. As a nonprofit organization, the GSA promotes industry sustainability, quality practices and standards around shea butter, which is used as a moisturizer in beauty products.

Rosie Akester has worked with the GSA shea butter cooperatives in Ghana since 2012, and when she joined Liz Earle in 2016 as a senior ingredients buyer, she felt it was a great way to develop the brand’s relationships with shea producers and support the source of shea production.

To help drive this change, Akester established a responsible sourcing strategy for Liz Earle that began with developing three traceability targets (bronze, silver, gold) in 2017. Through improved reporting, educating suppliers and reformulations, the brand went from a 45 percent bronze baseline in 2017 to 99 percent in 2021 across 75 suppliers.

Additionally, Liz Earle has become a member of the Union for Ethical Bio Trade and is now engaging suppliers to answer ethics and sustainability questions focusing on biodiversity issues.

Liz Earle’s shea project has also helped to set up the Timtooni Cooperative Shea project, which empowers shea nut pickers and protects the shea ecosystem that they rely on. Now into the second year of this project, the cooperative is getting ready for their first harvest of shea. Support for this project is planned to continue for at least five years, ensuring that the cooperative is self-sustaining.

“GSA is a fantastic organization to work with,” says Akester. “I am often in touch with them and representatives from Timtooni to discuss how the project is progressing, help to unblock any barriers that they may be facing and to engage Timtooni in discussions about what their needs are for the coming year.” 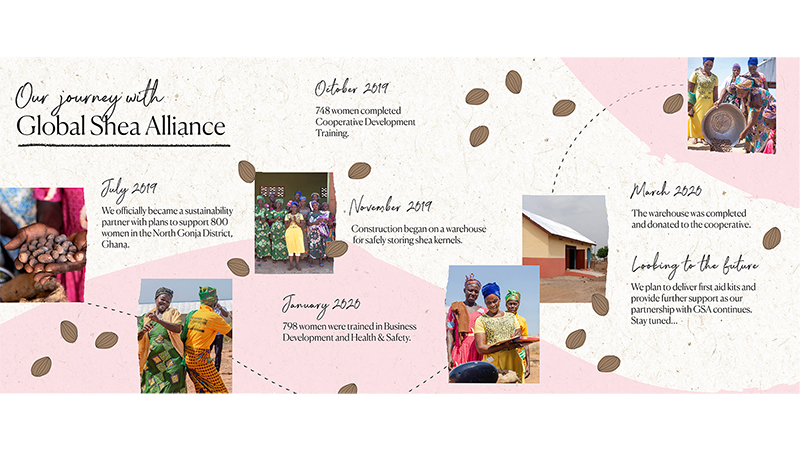 The shea program also helped build a small warehouse to give the women more space to collect shea nuts and to choose the best time to sell them, where previously they would have been reliant on storing the nuts in their own homes.

“Having a cooperative warehouse has a direct impact on improving the incomes of the shea nut pickers,” says Akester. “Our overall aim is to empower the women in decision-making toward managing the cooperative and the warehouse as well as building their confidence and administrative skills.”

2021 will be the first shea kernel harvest to use the warehouse – but that’s not the only thing Akester and Liz Earle are looking forward to as the partnership grows.

“I hope that as the WBA partnership continues that all our shea suppliers become GSA members and proactive sustainability partners,” she says. “The shea industry can play an important role in helping us all to transition to a sustainable future by showcasing a beautiful product that is able to improve livelihoods and the environment.”