Children in decades past had little beyond hopscotch and hide-and-seek to keep themselves entertained. But in today’s world, toddlers are handed tablets, and even babies have toy smartphones.

Emma Kenny, a child psychologist, TV presenter and writer in the UK, says the recipe for healthy, happy kids is simple – and it hasn’t changed: daily sunlight and limitless imagination.

Kenny recently collaborated with Harry Judd (of English pop band McFly) and his wife, Izzy, along with colleagues from Boots and Global Brands, to create the Soltan Imaginative Play Pack. The book is filled with ideas for outdoor activities – garden safari, water painting, cloud spotting and more – alongside tips on how to stay safe this summer with Soltan, a sun care brand sold exclusively at Boots.

The play pack originally was dreamed up as a physical book, with four of its pages printed on special thermochromic paper containing some ink that’s only visible in the sun. But then COVID-19 changed everything, and the team had to rethink its approach.

“When we first came up with the idea, we were really focused on promoting Soltan through this physical book that we could send to media and influencers,” explains Clair Geekie, public relations manager for owned brands at Global Brands. “But then we went into lockdown, and we started to think about all the children at home who could also benefit from a book like this. So we decided to make a free downloadable version available to everyone on Boots.com. It was really important that we helped all children continue to be creative and use their imaginations this summer.”

Kenny’s contributions were designed to encourage children to develop the skill of mindfulness – a practice she says will last a lifetime and enhance overall mental health and well-being. WBA spoke with Kenny to learn more about the science behind mindfulness, how imaginative play can positively affect health and how parents can help their kids have a fun and safe summer.

Tell us about yourself and your expertise in working with children.

I started working as a psychological therapist 20 years ago. Initially my work was with children between 4 and 16 years old, but I’ve worked with every age group. My favorite age for therapeutic work is 8 to 13 years old – a primary developmental stage. Most of my work has been with children who have experienced a high level of trauma, and who come from quite challenging backgrounds, don’t always have great parenting and wouldn’t necessarily get that kind of therapeutic engagement. I have a really big belief that it's important to use whatever you've got to give back.

My TV career began almost 15 years ago while consulting on ethics for documentaries featuring children, and I was later cast in a comedy psychology show. I now do a lot of appearances and speaking engagements on TV, radio and other media outlets to help as many people as I can.

I’m a mom of two boys, ages 15 and 17, and a big believer in compassionate parenting. I try to help other parents see that if you really want a well-rounded, happy child who’s full of opportunity, activity and creativity, you have to come from a compassionate perspective, which means no negativity.

What’s your favorite part about the activity book? What makes it special?

I love that the activities are so simple to do, which was really important to me – one of them requires only imagination and a spoon. I come from a working class background; we didn’t have a lot of money. So to me, imagination and creativity should never be dependent on income.

The Soltan team gave me free rein to talk about the activities I thought would be ideal, and they helped make them even more child-centric, which was lovely. All of the activities are really embedded in excellent research regarding the impact of nostalgia for parents; it makes many people happy to think of their own childhoods. Also, not all of the exercises have to be done with a parent. I think that's really important at the moment because parents may be struggling to cope with some of our current challenges with COVID-19.

On a subliminal level, the book introduces mindful practice – building blocks of resilience – which is paramount in happy humans. And even though it’s a small book, it’s rich with opportunities to do things that make a difference to kids and are really easy to inject into life.

Creativity is just a click away: Download the Soltan Imaginative Play Pack for free today at Boots.com. 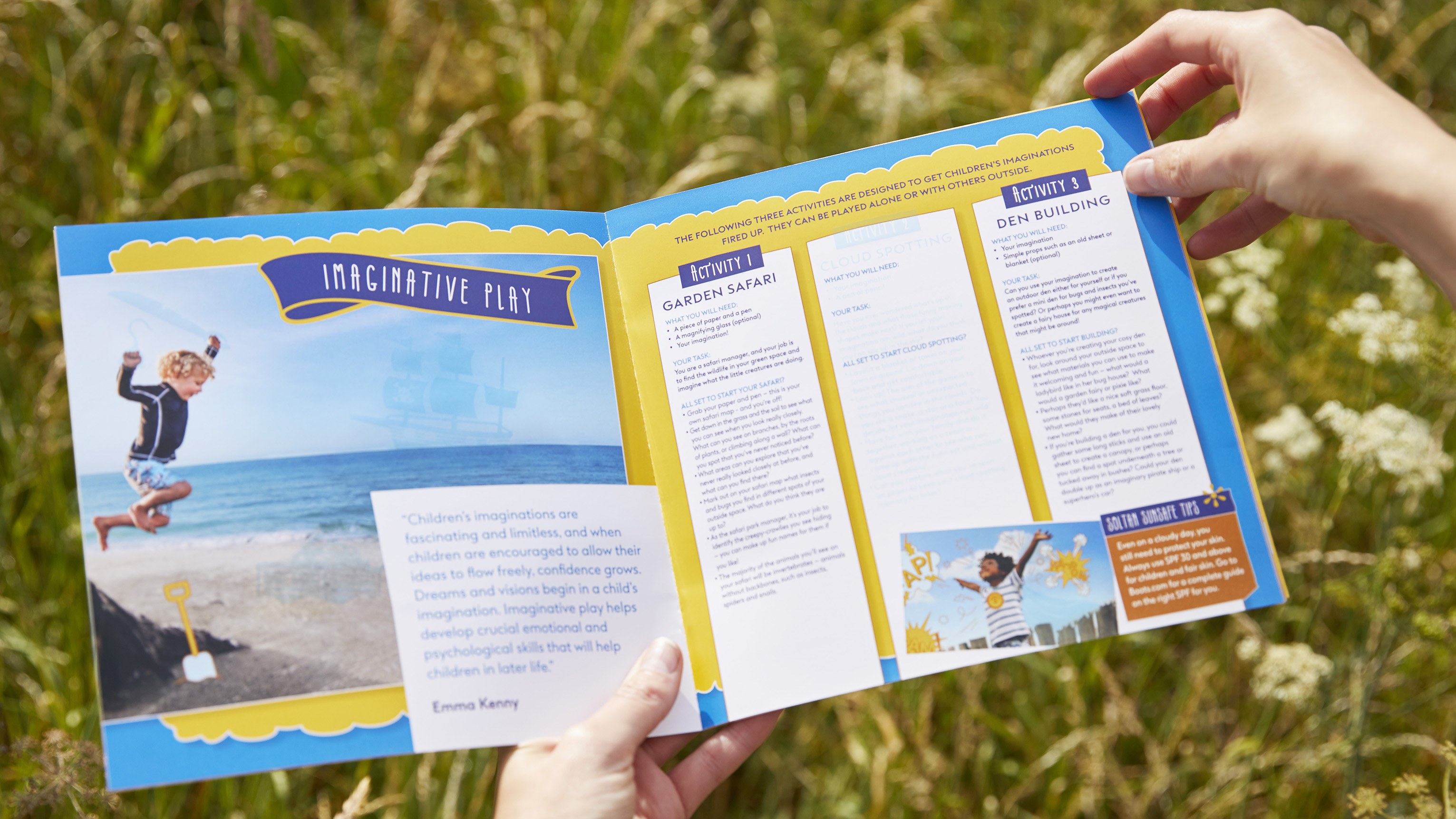 How can a parent help foster their child’s imagination?

Creative or imaginative games such as cops and robbers, chasing shadows or pretending you're somebody famous might seem so obvious for people who were children in the ’70s and ’80s, but they’re foreign to a lot of children these days. What we've done with children's brains is that we've amused them constantly, but with things that don't really help them develop.

From Day 1, we should be trying to get children to think about self-soothing, to be able to equip them with their imaginations during the boring periods. As in, “I feel really bored. What am I going to do with that boredom? I'm not going to feel frustrated – instead I'm going to motivate myself to do something fun. I'm going to create a world of wonder.” But we don't always do that. We’re not trying to make any parent feel guilty, but rather to give them a great resource to get started. 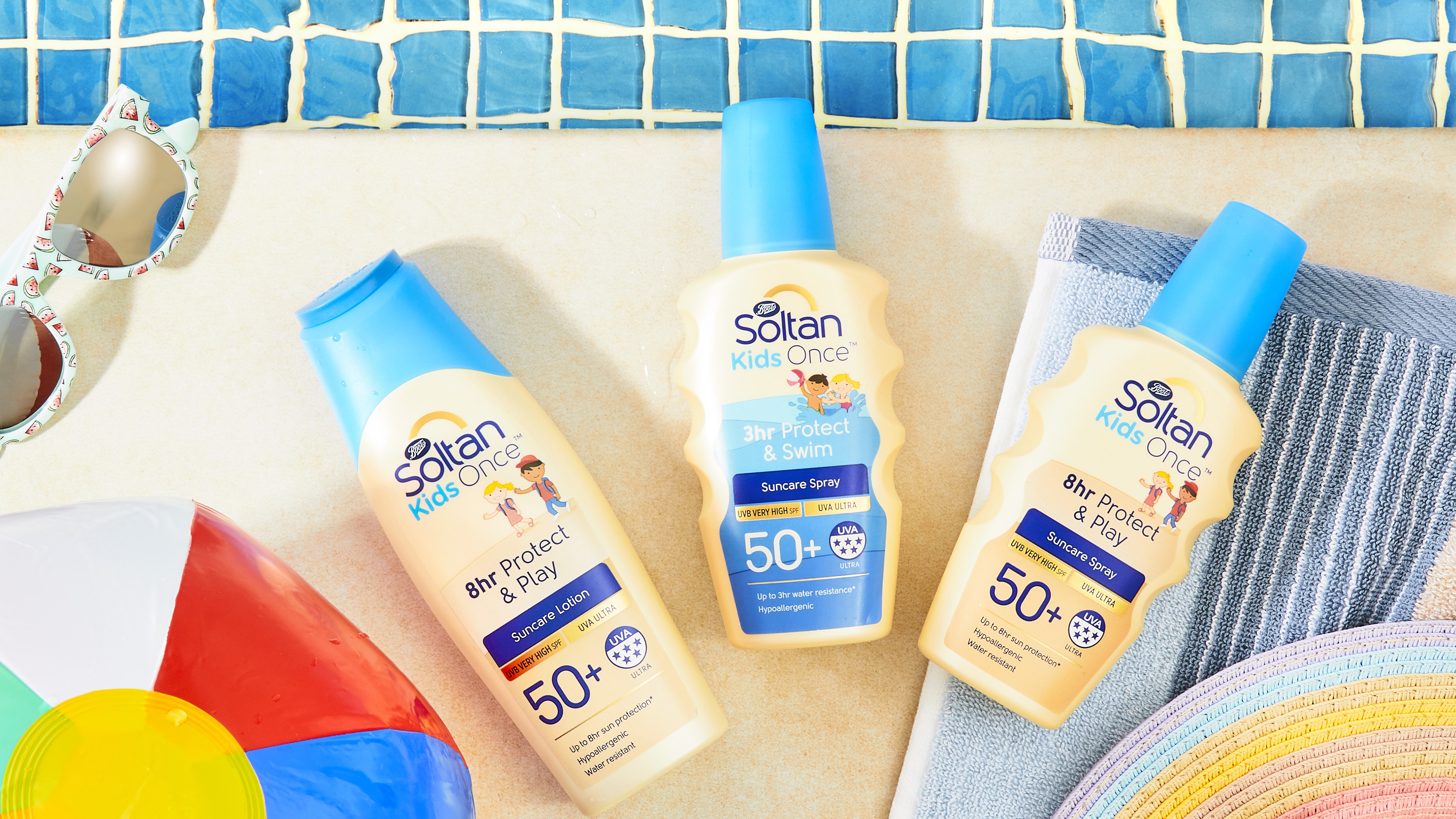 What’s the best way a parent can encourage their child to play outdoors while keeping sun safety in mind?

You know, it’s one of the things my mom always said to me when I was a very young girl: Wear sun protection and moisturize. And I've always done it. Soltan is a brand I’ve known and used for years, and it’s just one of the best – it’s the only leading sun care brand with full five-star UVA protection. And you can only buy it at Boots, which I don’t think of as a brand, really – it’s more of a trusted source you use for shopping.

I think in the UK, we’re a bit obsessed with making sure our children don't get burned when they’re playing outdoors. But we also know that getting outside in the sun is key to getting good sleep. Very often, parents think that children being occupied is enough to make them sleep, but that's not how children's brains work. Even when parents think they're occupying their child when they're coloring inside, it's just not the same chemically or clinically. They have to get outside and get sunlight on the skin to get their melatonin levels regulated. That has to happen for a happy childhood. But it has to be done safely.

Can imagination have an impact on health?

Absolutely. What's really interesting at the moment is that we've had a sustained period of stress due to COVID-19. People are very unhappy because both children and parents have been stuck inside for about three months. Now, the problem with that is we have a part of our brain called the prefrontal cortex, which is really important for higher functioning. It's about critical thinking, focus, reasoning and rationalization. And in a child, particularly between the ages of 4 and 6, that part of the brain is on fire. As soon as you add anxiety and stress to the mix, you impair that part of the brain.

We’ve had three months of our brains being impaired. So the problem with that is you’re chronically impacting the most important area of our brain. The instinct area, the bit that makes you scratch, shout, scream, eat, drink and react – that's been in control. Creativity and imagination kick-start the area of our prefrontal cortex that we need working.

And because children have had distress, it’s so important that they're not just sitting and watching TV because there's no way for that high-reasoning function to be kicked back in. We need to exercise our brain as much as we exercise our bodies, and creative play is the perfect exercise.

Yes, almost instantaneously. The moment they start to connect with the activities, whether it's playing, coloring or creating, lots of things change. Their patience grows, and patience teaches you that things are worth waiting for. It teaches you to have a reward in the longer term versus the immediate term, and that means you work harder. It helps your brain focus.

I think what you'll mostly see is that children start to learn communication skills because they start to think about the world in a different way. They want to tell you about it. They want to share it with you. One of the things I always think is funny about Western parenting is you see children often try to interrupt adults, and there is this real reticence when they do that to hush the child, make the child wait, because that's what good children do. I tell parents no, this child has got the most important thing to tell you. For that child, in that moment, you have no idea. And to quiet them down is to deny them that opportunity to be the authentic little being that they are. So I welcome those kinds of interruptions.

The other thing is that the disparity between children's lives in the Western world is unbelievably large, but what you can do with the brain is teach people that it's limitless. So it doesn't matter that you're living in public housing with a single mum on the breadline because in your brain, you can be a film star, and you can literally visualize that. That forms an identity with hope. And when you form an identity with hope, you form it with goals and you move through those goals. And that's why we get kids who come from very challenging backgrounds becoming incredibly successful. It's because they allowed themselves to have the vastness and limitlessness of their imagination. Turning on the switch for creativity and imaginative play is how the future person grows.