Dorothy Loy glanced at the 8-month-old girl bouncing on her father’s lap across the room and playfully puffed out her cheeks.

The father and daughter were at a rural health clinic in Dire Dawa, Ethiopia, among a group of 10 parents waiting to vaccinate their children – the youngest only 2 weeks old. Some parents had walked miles on muddy roads to get there, babies tied to their backs with brightly colored scarves. Others were joined by siblings and other family members who played and socialized in the garden outside. Everyone came dressed in their finest clothing.

Getting a shot can be a fearful experience for a kid, but in Ethiopia, it’s celebrated. It means giving a child the chance at a long, healthy life – the hope of every parent.

Since 2013, for every vaccine administered at a Walgreens or Duane Reade location, Walgreens has donated the value of a potentially lifesaving vaccine through the United Nations (UN) Foundation’s Shot@Life campaign.

In her role as director of Clinical Performance Strategy, Loy – who started her Walgreens Boots Alliance  career 12 years ago as a Walgreens pharmacist in Des Moines, Iowa – knew more than most about this large-scale, long-term initiative, called the Get a Shot. Give a Shot. program, and how it has helped provide 50 million vaccines to children around the world since its inception.

“I’m proud to work for a company that has a program like this because it shows that business can be a force for good,” says Loy. “This program benefits so many people, but I wanted to meet them and experience the difference it’s making in their lives.”

This desire and Loy’s role overseeing Walgreens immunization programs led to a three-day trip to Ethiopia in August 2019 with the UN Foundation to see the impact of the program and determine if improvements could be made.

Loy took a 13-hour direct flight from her home in Chicago to Addis Ababa, Ethiopia’s capital and largest city. Her first day included a visit to the Ethiopian Pharmaceuticals Supply Agency, a central supply chain that helps ensure medication, supplies and vaccines – including ones donated through Get a Shot. Give a Shot. – reach all public health facilities in Ethiopia.

Its main hub is a massive rectangular warehouse that sits atop a flat, dirt area off a bustling road in Addis Ababa. This is where all vaccines start in Ethiopia, and there are thousands inside, stacked in boxes up to the ceiling. Those that need to be temperature-controlled are kept in aptly named “cold rooms.”

“The vaccine supply is extremely valuable to them, so there’s a big focus on safety, like who has access to the building,” says Loy. “I also was pleased to learn that they always have enough vaccine, which tells me Walgreens continues to do its part.”

From the main warehouse, vaccines and other supplies are packed into refrigerated trucks and delivered to 16 regional hubs scattered throughout Ethiopia. These hubs then route supplies to health clinics, where clinic practitioners are responsible for getting supplies to smaller health posts. Think urban to rural to very rural. Practitioners often travel by motorcycle or on foot, storing the vaccines with ice packs, to get them to the posts.

Loy also visited a clinic in Addis Ababa run by the International Organization for Migration, which is led by the UN in coordination with governments around the world, providing medical services and advice to prepare immigrants for travel. The clinic is a collection of three two-story buildings, each offering different tests or services, such as mental health screenings and counseling, labs, X-rays, vitals, physicals and immunizations. The Ethiopian government only covers vaccinations for children, so this clinic helps adult immigrants, as well as children, get what they need for free.

“Disease travels,” says Loy. “It doesn’t care who you are or where you live – it goes with you. So it’s incredible that we play a role in helping protect not just these immigrants, but also people in the countries they’re traveling to.”

Think about measles for a minute. Although it can be easily prevented and controlled by vaccination, it’s one of the leading causes of death among children globally, particularly in developing countries. In 2019, the U.S. has seen its greatest number of reported measles cases since 1992, according to the CDC. And in Europe, the number of measles cases in the first half of 2019 surpassed that for all of 2018, according to the World Health Organization (WHO). These outbreaks are linked to travelers who brought it back from other countries where large measles outbreaks are occurring, and spurred by a growing trend of vaccine hesitancy or refusal among parents living in the U.S., UK and across Europe.

Measles is endemic in Ethiopia, with outbreaks reported annually, but scientists are working to slow the spread. Loy met some of these scientists at the Ethiopian Public Health Institute, which conducts research on national health issues, provides lab services and manages public health emergencies. Funded by the CDC and the WHO, the institute is one of 14 in Africa.

It largely monitors measles and polio, which also has not yet been eradicated in Ethiopia, by taking in samples from patients suspected to be infected from all over the country. If the lab finds a positive strain, it uses DNA sequencing to determine where the strain originated, then sends a healthcare team there to vaccinate the community.

“Our reasons for vaccinating are the same across the globe: to keep people healthy,” says Loy. “Sometimes people think polio isn’t something we have to worry about here in the U.S. because we don’t have it, but it’s a global problem we all have to think and care about. Just because a disease isn’t active in our country right now doesn’t meant it can’t be.”

The next morning, Loy ducked into a van with colleagues from the UN Foundation and UNICEF and headed to a health post outside Addis Ababa. They drove past mothers begging for money, babies in tow. Others sold tissues, bananas, keychains and anything else they might have to offer on the side of the road. There were people everywhere, mingling and talking. The sun was barely up, but the city was alive.

Loy sniffed twice and wondered why it smelled like … toast? Not toast, her colleagues explained. Coffee. Ethiopia is considered the birthplace of coffee, and you can get a cup just about anywhere, from coffee stalls in bars and restaurants to a woman on the side of the road with a thermos. An estimated 15 million people, or about 15 percent of Ethiopia’s population, make their living from coffee, according to the USDA Foreign Agricultural Service. It’s a cultural staple, too, with coffee ceremonies – akin to British tea time – occurring daily. During these social gatherings, friends and family pause to spend time together while a host follows a ritualistic process of making coffee by roasting beans over an open flame.

Loy noticed the smoky scent fading to fresh air as they continued to drive. Every mile seemed to take them back to a simpler time. People used donkey-pulled carts instead of cars. Paved roads crumbled into rocks and dirt. For the most part, there was no plumbing or electricity.

They pulled up to the health post in Chalaba Silassie an hour later. The small, two-room building had no glass in the windows. Its roof contained solar panels, provided by the UN Foundation, which powered a small cooler inside storing a month’s supply of vaccines. 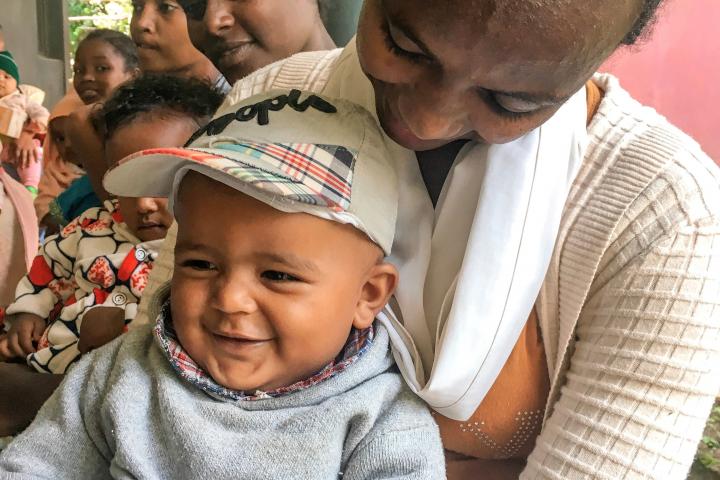 A baby and his mother smile outside a health clinic in Dire Dawa, Ethiopia.

It was vaccination day at the post, and seven mothers and babies had made the trek. Vaccination days are the one time a month when parents in the community, usually mothers, break from their normal day-to-day routines and travel to the post to represent their families. They wear their most beautiful gowns and biggest smiles.

The clinic practitioner reviewed each child’s small, passport-like booklet used to track their vaccines, then spoke with the mothers about why the vaccines were important. When it was time to administer the shots, the mothers, in one fluid motion, reached behind themselves to unwrap the colorful fleece blankets holding their babies and swung the babies around to their laps. “It was like a beautiful, elegant dance,” says Loy.

Loy administered vaccines to two babies. Their reactions were the same as you’d expect from any child getting a shot – pouty lips and tears – but they were quickly soothed when fed by their mothers.

The sounds of soundness

Three children had something extra special to celebrate that day: They were completing their required vaccine regimens. The practitioner congratulated the children and their families and presented each with a paper certificate. This was an achievement, and the excitement was contagious.

As Loy and her colleagues drove back to Addis Ababa and night approached, the city sighed. The chaotic chatter that had floated out of open-air cafes and shops during the day was slowly met with Ethio-jazz music, a staple of the evening.

Back home now, Loy is determined to bring the excitement she felt during her trip to her colleagues throughout WBA.

“I wish I could have taken everyone from our company with me so they could see what I saw, and feel that same motivation,” she says. “This trip reminded me that all our pharmacists are working for a higher purpose day in and day out. Sometimes that’s easy to forget, so it’s important to remember why we chose to become pharmacists: to make an impact on people’s lives every day, both in their neighborhood and around the world. Healthcare is personal, and the difference we’re making is real.”